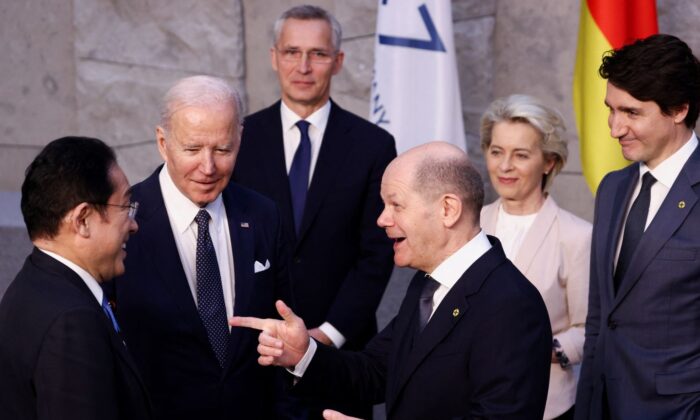 NATO on Thursday issued a lengthy statement laying out its defense readiness doctrine against Russia, condemning Moscow’s invasion of Ukraine “in the strongest possible terms.”

“We, the Heads of State and Government of the 30 NATO Allies, have met today to address Russia’s aggression against Ukraine, the gravest threat to Euro-Atlantic security in decades. Russia’s war against Ukraine has shattered peace in Europe and is causing enormous human suffering and destruction,” said the statement ahead of a summit in Brussels.

The NATO statement called on Russian President Vladimir Putin to “immediately stop this war” and withdraw its military from Ukraine and also urged Russia to “call on Belarus to end its complicity.”

Western leaders are meeting in Brussels on Thursday as reports surfaced that the United States and European Union will tighten sanctions against Russia. This week, NATO’s leadership indicated that more military aid will be provided to Ukraine and more troops will be sent to Central and Eastern Europe in the near future.

However, they stopped short of saying NATO would enforce a no-fly zone over Ukraine, which has been sought by Ukrainian President Volodymyr Zelenskyy. The leaders also said they would not provide a full boycott to Russian oil and gas, which Zelenskyy has demanded in recent days.

“We agreed to strengthen our deterrence and defense for the longer-term. We also agreed to give further support to Ukraine and to continue to impose costs on Russia,” NATO Secretary-General Jens Stoltenberg said after leaders gathered at NATO headquarters, according to Reuters.

NATO’s statement Thursday said that its member states are fully committed to the alliance’s Article 5, which stipulates that an attack on one NATO member is an attack on all members.

“In response to Russia’s actions, we have activated NATO’s defense plans, deployed elements of the NATO Response Force, and placed 40,000 troops on our eastern flank, along with significant air and naval assets, under direct NATO command supported by Allies’ national deployments,” the statement said. “We are also establishing four additional multinational battlegroups in Bulgaria, Hungary, Romania, and Slovakia.”

The statement also acknowledged that NATO has trained Ukrainian troops since 2014 after Russia annexed the Crimean Peninsula and began its support for separatist areas in the Donbass. It did not say how many or in what capacity.

“Ukraine has a fundamental right to self-defense under the United Nations Charter,” it read. “Since 2014, we have provided extensive support to Ukraine’s ability to exercise that right. We have trained Ukraine’s armed forces, strengthening their military capabilities, and capacities and enhancing their resilience.”

Meanwhile, NATO members “will also continue to provide assistance in such areas as cybersecurity and protection against threats of a chemical, biological, radiological, and nuclear nature,” the statement continued.