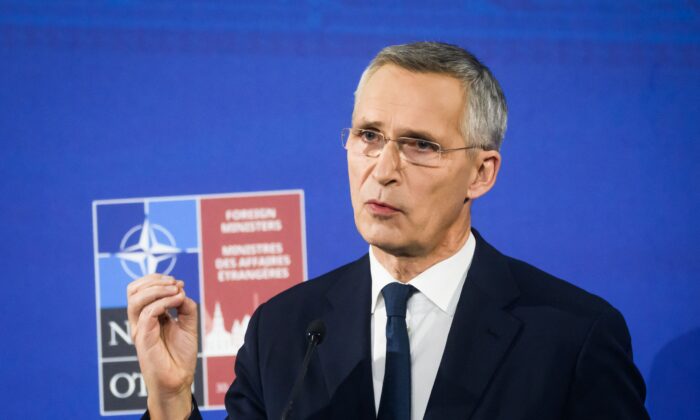 NATO’s Secretary-General Jens Stoltenberg on Tuesday expressed concern over a Russian military buildup near its border with Ukraine.

“We see Russian military build-up, we see heavy armor, we see drones and combat-ready troops,” Stoltenberg in a statement. “We call on Russia to be transparent because this is unprovoked and unexplained.”

The comments were made as ministers of the alliance arrived for a two-day meeting in Riga, Latvia, on Nov. 30 to discuss Russia’s military buildup close to Ukraine’s border, among other issues.

Ukrainian and Western officials expressed worry this month that a military buildup could signal plans by Moscow to invade its ex-Soviet neighbor. Moscow has repeatedly insisted it has no such intention and has accused Ukraine and its Western backers of making the claims to cover up their own allegedly aggressive designs.

Stoltenberg said that Ukraine is a “highly valued partner” of NATO and there are different options on the table if Russia should renew any military aggression against the Eastern European nation.

“We have different options and we have demonstrated over the years in reactions to Russia’s previous use of military force against Ukraine that we can sustain heavy economic and financial sanctions, political sanctions,” the NATO leader told reporters in Riga.

Meanwhile, U.S. Secretary of State Anthony Blinken on Tuesday also warned Moscow that any escalatory actions against Kyiv would be of great concern to the United States, stressing that “any renewed aggression would trigger serious consequences.”

“We are very concerned about the movements we’ve seen along Ukraine’s border,” Blinken said. “We know that Russia often combines those efforts with internal efforts to destabilize a country. That’s part of the playbook and we’re looking at it very closely.”

In response, Russia’s President Vladimir Putin on Tuesday warned NATO against deploying its troops and weapons to Ukraine, saying it represents “a red line” for Russia and would trigger a strong response.

Speaking to participants of an online investment forum, Putin said that NATO’s eastward expansion has threatened Russia’s core security interests. He expressed concern that NATO could eventually use the Ukrainian territory to deploy missiles capable of reaching Moscow in five minutes.

“The emergence of such threats represents a ‘red line’ for us,” Putin said. “I hope that it will not get to that and common sense and responsibility for their own countries and the global community will eventually prevail.”

The Russian leader noted that Russia is concerned about NATO drills near its borders, pointing at a recent exercise that involved U.S. strategic bombers.

“Strategic bombers, which carry precision weapons and are capable of carrying nuclear weapons, were flying as close as 20 kilometers [12 miles] to our border,” Putin said. “That represents a threat for us,” he added.

The comments come following a Nov. 26 press briefing, in which Ukrainian President Volodymyr Zelensky said Kyiv and Moscow have effectively “been at war for eight years” and that the “likelihood of large-scale or continuation of a strong escalation by Russia or militants backed by the Russian Federation may take place any day.”

Zelensky told reporters at the briefing that his country’s intelligence services had uncovered plans for a Russia-backed coup on Dec. 1 or Dec. 2, allegedly funded by one of Ukraine’s richest oligarchs, Rinat Akhmetov. The remark prompted the Kremlin to respond, denying the allegations.

President Joe Biden told reporters on Nov. 26 that he’s concerned about the alleged coup plot, adding that he would “in all probability” call Putin to discuss Zelensky’s claim.