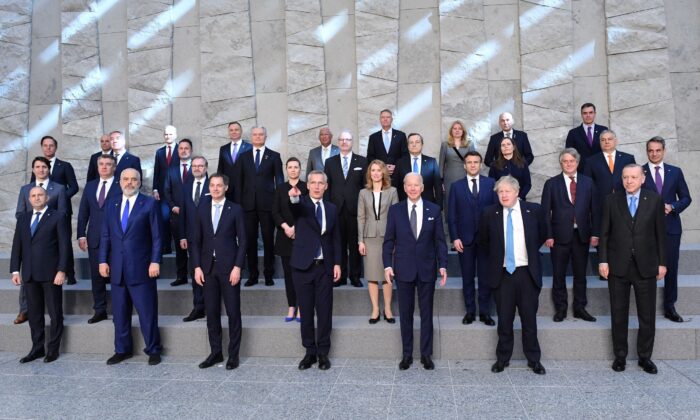 NATO reaffirmed its commitment to leverage devastating economic consequences on Russia and to condemn the nation’s invasion of Ukraine during a meeting in Brussels on March 24. The alliance also called on China’s communist regime to stop its support of Russia.

“Russia’s war against Ukraine has shattered peace in Europe and is causing enormous human suffering and destruction,” the 30 state leaders of the NATO alliance said in a joint statement.

“We condemn Russia’s invasion of Ukraine in the strongest possible terms.”

The alliance jointly reaffirmed Ukraine’s right to sovereignty and territorial integrity, and said Ukraine retained an inviolable right to self-defense.

NATO called on Russian leader Vladimir Putin to immediately stop the war in Ukraine and withdraw his military forces and called on Belarus to end its complicity in the invasion.

“Massive sanctions and heavy political costs have been imposed on Russia in order to bring an end to this war,” the statement said. “We remain determined to maintain coordinated international pressure on Russia.”

“We are united in our resolve to counter Russia’s attempts to destroy the foundations of international security and stability. We are holding Russia and Belarus to account.”

NATO leaders called on the Chinese Communist Party (CCP) to halt its support of Russia in the war.

“China must not provide economic or military support for the Russian invasion,” NATO Secretary-General Jens Stoltenberg said at a press conference following the summit. “Instead, Beijing should use its significant influence on Russia. And promote an immediate, peaceful resolution.”

Stoltenberg’s comments were just the latest in a deterioration of relations between China and NATO following Chinese Communist Party (CCO) efforts to cement an anti-Western alliance with Russia.

On Feb. 4, Putin and CCP leader Xi Jinping made a declaration announcing a partnership with “no limits,” and in March, Chinese officials reiterated that Russia was the Party’s “most important strategic partner.”

Since then, Western intelligence sources have claimed that Chinese officials knew about Russia’s invasion plans in advance and requested that Russia postpone any hostilities until the conclusion of the Beijing Olympics.

Beijing has also pledged to continue normal trade relations with Moscow amid the war and has refused to join multilateral sanctions leveraged against Russia by the international community.

Further, sources in the U.S. State Department claimed earlier in March that Chinese communist leaders were mulling the possibility of committing direct military assistance to the Russian war effort. Moscow and Beijing have denied the allegation.

President Joe Biden has said China would face “consequences” if it committed to such a course of action, but the White House didn’t elaborate on what those consequences would be or how, precisely, they would be triggered.

“We are concerned by recent public comments by [Chinese] officials and call on China to cease amplifying the Kremlin’s false narratives, in particular on the war and on NATO, and to promote a peaceful resolution to the conflict,” NATO’s March 24 statement said.

The comment appears to be a reference to Chinese diplomats and state media promoting Russian talking points, such as the narratives that the United States maintains bio labs in Ukraine for a bioweapons program and that NATO expansion was to blame for Russia’s aggression.

Ukraine was not being considered for membership in NATO and, even if it had applied, would have been rejected, as NATO’s bylaws prevent the admittance of any nation that doesn’t maintain territorial integrity, as has been the case in Ukraine since the annexation of Crimea in 2014.

“We call on all states, including the People’s Republic of China (PRC), to uphold the international order including the principles of sovereignty and territorial integrity, as enshrined in the UN Charter, to abstain from supporting Russia’s war effort in any way, and to refrain from any action that helps Russia circumvent sanctions,” the statement said.

NATO’s callout of the CCP marks the latest development in the Western alliance’s current strategic reorientation. The alliance is expected to name the Chinese regime as a key security challenge its “Strategic Concept” later this year.

The Strategic Concept is second in importance only to NATO’s founding charter and defines the overarching strategy of the alliance. The new strategy will mark the first time ever that China has been mentioned in such a document.

The NATO statement issued Thursday, however, said that Russia’s aggression against Ukraine was “the gravest threat to Euro-Atlantic security in decades,” suggesting that Chinese support of the war would be interpreted within that context.

The U.S. Director of National Intelligence warned Congress early in March that Sino-Russian cooperation would only grow in the coming years.

Western leaders have also warned that the United States and its NATO allies face an unprecedented threat in the combined nuclear arsenals of Russia and China.

The mounting pressure on the Chinese communist regime to end its support for Russia’s war follows other developments in the war this week.

In one incident, a Ukrainian vice prime minister accused Chinese drone manufacturer DJI of degrading the performance of its products in Ukraine. In another, the United States formally acknowledged Russian war crimes in Ukraine.

U.S. Secretary of State Antony Blinken confirmed on Wednesday that the Russian military had committed war crimes in Ukraine, and that the United States held evidence of such from open intelligence sources. The news followed the announcement of an international investigation into the matter on March 2.

Blinken added that the attacks included missile strikes on a maternity hospital and a theater marked with the Russian word for “children” to signal that it was being used to house civilian families.

“Putin’s forces used these same tactics in Grozny, Chechnya, and Aleppo, Syria, where they intensified their bombardment of cities to break the will of the people,” Blinken said.

“Every day that Russia’s forces continue their brutal attacks, the number of innocent civilians killed and wounded, including women and children, climbs.”

NATO also announced that it would raise the number of troops stationed in Eastern Europe to prepare for any escalations by the Russian military, and that the alliance would continue to support Ukraine’s preparation for the possibility of responding to chemical, biological, radiological, or nuclear attacks from Russia.

The NATO statement said that the alliance had activated its defense plans, forward deployed elements of its Response Force, and placed some 40,000 troops along the nations that make up NATO’s easternmost flank.

It added that significant air and naval forces had also been mobilized in the region under direct NATO command.

“We will now accelerate NATO’s transformation for a more dangerous strategic reality, including through the adoption of the next Strategic Concept in Madrid.”