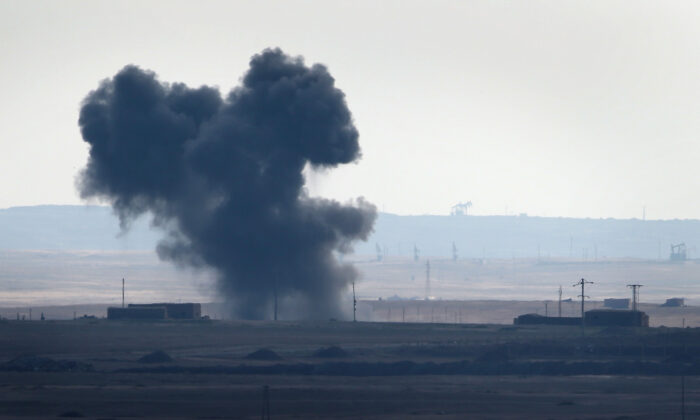 Russia Denies It Was Responsible for the Bombing
By Jack Phillips

NATO said it is condemning “indiscriminate airstrikes by the Syrian regime and Russia,” Secretary-General Jens Stoltenberg said, after reports said that dozens of Turkish soldiers were killed in an attack near Syria’s Idlib on Thursday.

Turkey requested an urgent NATO security meeting on Friday following the bombing. But Stoltenberg did not elaborate on any changes that NATO might make in the area.

“I call on them to stop their offensive, to respect international law and to back U.N. efforts for a peaceful solution,” Stoltenberg said. “This dangerous situation must be de-escalated.”

“President Trump reaffirmed his support for Turkey’s efforts to de-escalate the situation in northwest Syria and avoid a humanitarian catastrophe. The two leaders agreed that the Syrian regime, Russia, and the Iranian regime must halt their offensive before more innocent civilians are killed and displaced,” Deere said.

On Thursday, Russia’s foreign ministry said that the country’s air force is supporting the Syrian regime’s “Dawn over Idlib” operation in the province and is focusing “exclusively on the terrorists who are holed up in the de-escalation zone.”

In a statement to ABC News, Russia’s defense ministry denied that it was responsible for the airstrikes that killed 33 Turkish troops. It said that the Turkish soldiers came under fire from Syrian forces in the area.

The ministry stated that Ankara had informed Russia that “no units of the Turkish armed forces were in the area of the village of Behun and they shouldn’t have been there.” When Russia became aware of the airstrike, it allowed for a ceasefire to allow Turkey to evacuate its dead and wounded, said the ministry.

At the same time, hundreds of migrants in Turkey started arriving on the borders with Greece and Bulgaria on Friday after a senior Turkish official said Ankara would no longer abide by a 2016 EU deal and stop refugees from reaching Europe.

Some wore face masks, in an apparent attempt to guard against the coronavirus outbreak now sweeping the world and adding to the concerns of hard-pressed European authorities.

Greece and Bulgaria, both European Union member states, vowed not to admit the migrants. Greek police used smoke grenades at one border crossing, while Bulgaria sent an extra 1,000 troops to its border with Turkey.