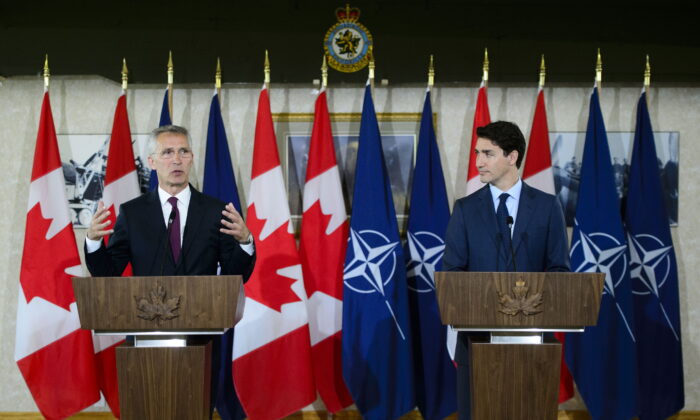 NATO Secretary General Jens Stoltenberg is urging Canada and all NATO allies to fulfill their pledge to increase defence spending to at least two percent of gross domestic product (GDP).

Referring to a 2014 agreement that commits allies to increase funding to “strengthen the military capabilities the alliance needs,” Stoltenberg said there is a need “to do more,” particularly in light of the current Russia-Ukraine conflict.

“We have an agreement and I expect all allies, also Canada, to follow up on that—that we should aim at two percent of GDP, because we live in a world which is more dangerous,” said Stoltenberg in an interview on CBC’s Rosemary Barton Live on March 20.

Asked what level of spending he hoped to see from Canada, given Defence Minister Anita Anand’s pledge on March 16 to present “aggressive options” to the cabinet ahead of the upcoming spring budget, Stoltenberg didn’t answer directly but reiterated the need to stick to the agreement.

“Canada really contributes [to] our collective defence with troops, with capabilities… but in a more dangerous world, we need to invest more in our security,” he said.

Several European countries including Germany, Poland and Denmark have increased military spending in response to the war in Ukraine.

Anand said the options she is putting forward will include spending exceeding, hitting or falling short of NATO’s target.

“My role is to bring forward a number of different options for our government to consider,” she said in an interview on CBC’s Power & Politics on March 16.

In terms of lethal aid to Ukraine, the defence minister said Canada had now “exhausted” the inventory of equipment in the Canadian Armed Forces.

“There are capacity issues that we need to make sure we are on top of for the purposes of ensuring the Canadian Armed Forces is well resourced,” said Anand.

In a press release on March 16, National Defence said that Canada has committed 3,400 troops to NATO’s response force, and donated $82.8 million in military equipment since the crisis in Ukraine began.

On March 19, Canada’s HMCS Halifax, a navy frigate that has served in the Royal Canadian Navy and Canadian Forces since 1992, set sail for a six-month deployment to the North Atlantic and northern European waters in support of NATO in the wake of Russia’s invasion of Ukraine.

Questions over Canada’s military spending come as heads of state are set to meet at the alliance’s headquarters in Brussels, Belgium, on March 24, to address Russia’s ongoing invasion of Ukraine.

“We will also start a discussion not only about the immediate response to the crisis in Ukraine, but also how we should adapt NATO, reset our deterrence and defence for the longer term, as a result of this brutal war that is taking place in Ukraine,” Stoltenberg said.

At a joint press conference in London with British Prime Minister Boris Johnson and the Netherlands Prime Minister Mark Rutte on March 7, Trudeau defended his government’s NATO efforts, saying Ottawa had put forward a plan a few years ago to increase the country’s defence spending by 70 percent. He also said that more could be done.

“We also recognize that the context is changing rapidly around the world and we need to make sure that the women and men who serve in the Canadian armed forces have all the equipment necessary to be able to stand strongly as we always have as members of NATO,” Trudeau said.

“We will continue to look at what more we can do.”

In 2021, Canada’s defence spending was an estimated 1.4 percent of GDP. Allies including the United States and the UK spent about 3.5 percent, and 2.3 percent of GDP, respectively that year.