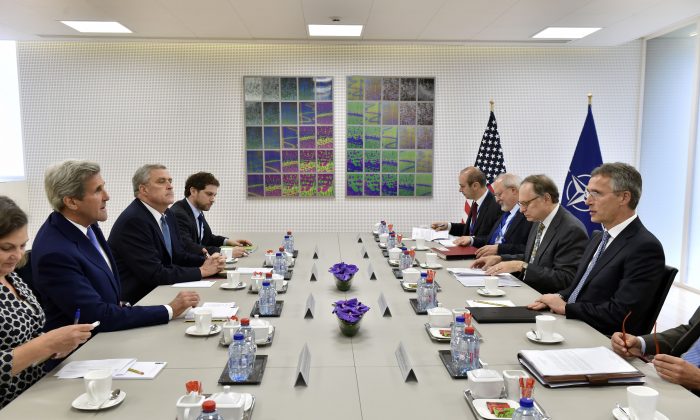 BRUSSELS—NATO leaders will approve the use of AWACS surveillance aircraft to assist the U.S.-led coalition fighting the Islamic State extremist group, the alliance’s secretary-general said Monday.

Jens Stoltenberg said he expects the alliance summit in Warsaw also to agree on a new role for NATO in the Central Mediterranean, where the European Union has deployed ships to halt human trafficking.

At a news conference at NATO headquarters, Stoltenberg outlined the ambitious agenda of the two-day summit, which opens Friday in the Polish capital.

NATO officials have said the AWACS planes would fly in Turkish or international airspace, but be capable of peering electronically into areas of Syria and Iraq now in the hands of Islamic State to help the U.S.-led forces that are fighting the group.

Stoltenberg said NATO leaders this week will also agree to begin training and capacity-building measures for the Iraqi military inside Iraq, expanding an alliance program that has been training Iraqi officers in Jordan.

Since the alliance’s last summit in September 2014 in Wales, NATO has embarked on the biggest reinforcement of its collective defense capabilities since the Cold War, spurred by a resurgent and unfriendly Russia, as well as the spread of Islamic extremism.

“We delivered a faster, a stronger and a more ready alliance,” Stoltenberg said. “We now need to take the next steps.”

The summit, to be attended by President Barack Obama and leaders of the 27 other NATO nations, comes at a moment of great uncertainty in Europe caused by the British public’s June 23 vote to leave the European Union.

The alliance chief said the NATO summit will endorse a decision already taken in principle to deploy four multinational battalions totaling around 4,000 troops to bolster the defenses of Poland and the Baltic states of Estonia, Latvia and Lithuania against what is perceived as an increased Russian threat.

“This is a great contribution to our common security,” Stoltenberg said. “And a clear signal that our nations will defend one another, on both sides of the Atlantic.”

For southeastern Europe, NATO leaders will approve the formation of a multinational brigade to be based in Romania, Stoltenberg said. Some local leaders had hoped for much more — there were calls for creation of a NATO Black Sea flotilla—but Stoltenberg said the summit decision is a start.

Stoltenberg also said that after years of decline, defense spending by European NATO members and Canada is expected to rise this year by 3 percent, or $8 billion.

“But we have a very long way to go and we must keep up the momentum,” he cautioned.

The secretary-general said the alliance and Russia weren’t able to agree to hold a meeting of the NATO-Russia Council before the summit, as NATO had wanted. But he said he hopes one can be convened shortly afterward.