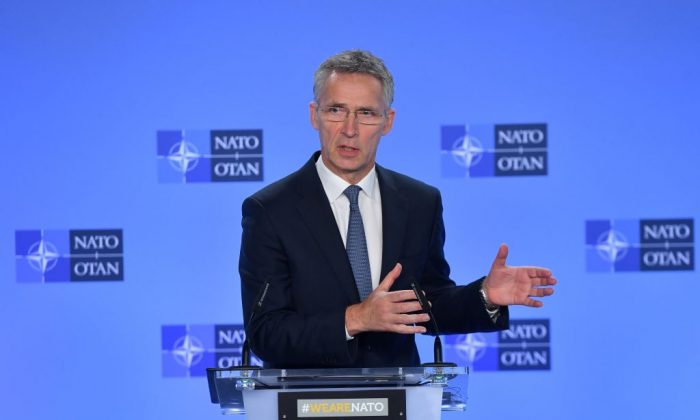 NATO chief Jens Stoltenberg is seeking a meeting of the NATO-Russia Council (NRC) next month to address the developments in Ukraine.

Stoltenberg said on Dec. 26 that he has contacted officials in Moscow to ensure they will be in attendance for the proposed Jan. 12, 2022, meeting. NATO announced earlier this month that the alliance’s Military Council would meet in Brussels on Jan. 12–13.

“As the North Atlantic Council made clear in its December 16 statement on the situation in and around Ukraine, any dialogue with Russia would have to proceed on the basis of reciprocity, address NATO’s concerns about Russia’s actions, be based on the core principles and foundational documents of European security, and take place in consultation with NATO’s European Partners,” it stated.

A spokesman for the Russian foreign ministry told TASS that Moscow had received NATO’s proposal to call a council meeting and is considering it.

“We have already received this proposal. We are considering it,” the spokesman said.

The NATO-Russia Council was established in 2002 as a “mechanism for consultation, consensus-building, cooperation, joint decision, and joint action” but is currently inactive due to the conflict in Ukraine’s east between Russia-backed separatists and the Ukrainian military.

NATO has denounced Russia’s 2014 annexation of Crimea from Ukraine, an integral part of the country’s territory, as a gross violation of international law. The organization has urged Moscow to respect its neighbor’s territorial sovereignty. Ukraine declared national sovereignty on July 16, 1990.

However, tensions have continued to mount in recent weeks over Ukraine. Russian President Vladimir Putin has reportedly amassed more than 100,000 soldiers near the border shared by the two nations, sparking concerns of a possible invasion. Russia has repeatedly denied the accusation.

Last week, Russia’s Foreign Ministry published a document that includes demands that it has made to the United States and NATO, including effectively denying membership to Ukraine and other former Soviet countries and scaling back military deployments in central and eastern Europe.

According to TASS, Putin’s proposal calls on the United States to “take measures to prevent the further eastward expansion of the North Atlantic Treaty Organization (NATO) and deny accession to the Alliance to the former USSR republics.”

The proposals also ask that the United States refrain from building military bases in former Soviet states that aren’t NATO members and from using their infrastructure for military activity. If the proposals are met, Moscow says it will refrain from deploying its armed forces and weapons into regions where such deployment could be viewed as a threat to Washington’s security, except deployment on one’s national territory, according to TASS.

“The Parties shall refrain from flying heavy bombers equipped for nuclear or non-nuclear armaments or deploying surface warships of any type, including in the framework of international organizations, military alliances or coalitions, in the areas outside national airspace and national territorial waters respectively, from where they can attack targets in the territory of the other Party,” the document reads.

NATO and Washington have expressed strong opposition to the proposals. The Foundation for Defense of Democracies stated on Dec. 22 that Putin is attempting to “revive the Cold War by redrawing the lines of Europe.”

However, U.S. officials have said they are open to bilateral talks.

But Putin said last week that Moscow is ready to take “adequate military and technical measures” if Western countries continue to pursue an “aggressive” policy and decline Russia’s pledge to stop the eastward expansion of NATO and the alliance.

“We are not demanding any special exclusive conditions. … And in case Western colleagues continue their clearly aggressive line, we will take adequate military and technical measures in response,” Putin said on Dec. 21 while meeting with Russia’s top military brass.

“We will react firmly to unfriendly steps, and I’d like to underline that we have the complete right to do this.”

Lorenz Duchamps and The Associated Press contributed to this report.