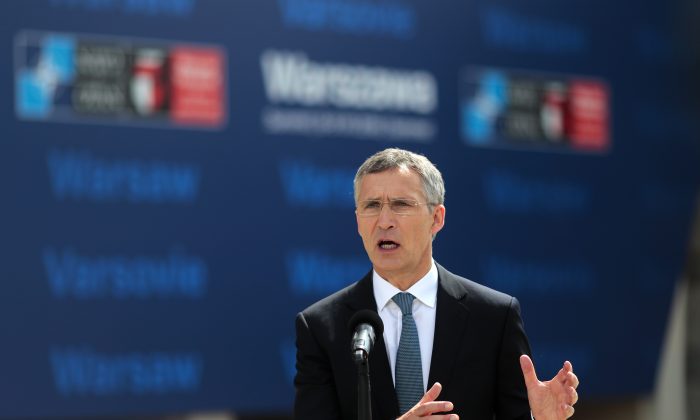 NATO Secretary General Jens Stoltenberg briefs the media prior to the NATO summit in Warsaw, Poland, Friday, July 8, 2016. Starting Friday, US President Barack Obama and leaders of the 27 other NATO countries will take decisions in Warsaw on how to deal with a resurgent Russia, violent extremist organizations like Islamic State, attacks in cyberspace and other menaces to allies' security during a summit described by many observers as NATO's most crucial meeting since the 1989 fall of the Berlin Wall.(AP Photo/Markus Schreiber)
International

WARSAW, Poland—The NATO military alliance doesn’t only need to reinforce its own armed forces, it also must also come to the aid of partner nations in the Middle East and North Africa that are threatened by extremist violence, NATO’s chief said Friday.

“For our nations to be safe, it’s not enough to keep our defenses strong, we must help to make our partners stronger,” NATO Secretary-General Jens Stoltenberg said, speaking before the opening of a key summit meeting of alliance heads of state and government.

“Training local forces is often our best weapon against violent extremism,” Stoltenberg told a forum of defense and security experts. Among the items on the NATO summit’s ambitious agenda is increased assistance for Iraq’s military, extension of the West’s financial commitment to the Afghan military and police, and aid for Tunisia.

Later, arriving at the Warsaw sports stadium where NATO leaders will hold two days of meetings, Stoltenberg predicted “a landmark summit.” Leaders will get NATO more involved in the campaign against Islamic State by authorizing use of AWACS surveillance aircraft to assist the U.S.-led coalition fighting the group, he said.

“The decisions we’re going to take together will once again confirm that Europe and North America stand together, act together to support all allies against any threats,” Stoltenberg said.

In Warsaw, U.S. President Barack Obama and leaders from NATO’s 27 other allies will also order deployment of multinational units on the alliance’s eastern frontiers — a move Germany’s defense minister said is proper to counter what she called a “completely unpredictable and aggressive Russia.”

She told German broadcaster ARD that NATO must maintain a dialogue with Russia, but from a “position of strength.”

“It’s important that NATO deploys with such strength that it’s clear nobody can see an advantage in attacking this military alliance,” the German minister said.