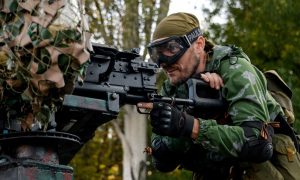 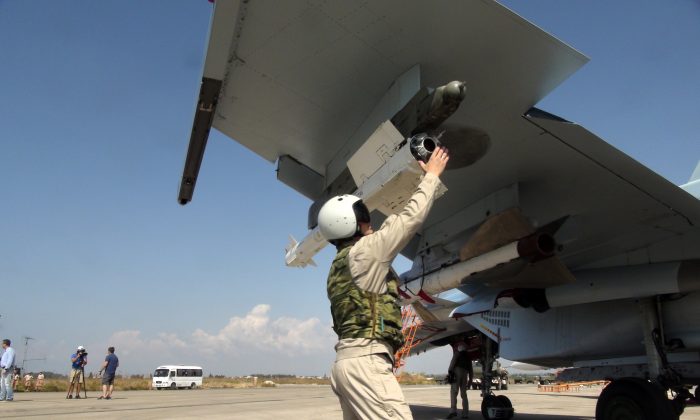 Russian pilot fixes an air-to-air missile at his Su-30 jet fighter before a take off at Hmeimim airbase in Syria, on Monday, Oct. 5, 2015. (AP Photo/Dmitry Steshin, Komsomolskaya Pravda, Photo via AP)
International

BRUSSELS—NATO’s secretary-general on Tuesday rejected Moscow’s claim that its military incursion into alliance airspace over Turkey wasn’t intentional or important, saying there were two separate incidents and “the violation lasted for a long time.”

Turkey’s military, meanwhile, said more of its jets patrolling the border with Syria were placed in a radar lock by Russian planes and surface-to-air missile systems.

In Syria, Russian warplanes reportedly continued pounding targets in the country, where the Kremlin has come to the aid of beleaguered ally President Bashar Assad.

“It doesn’t look like an accident, and we’ve seen two of them over the weekend,” he added.

Both towns are controlled by the Islamic State group. The official also said IS bases were targeted in Palmyra and surrounding areas in the central Homs province, destroying 20 vehicles, three arms depots and three rocket launchers.

Meanwhile, the Syrian air force was said to have targeted areas in rural Latakia controlled by militants, with the military official reporting the death of at least 12 fighters, including two Turks, one Saudi militant from al-Qaida’s affiliate in Syria, Nusra Front, and one Palestinian.

The Britain-based Syrian Observatory for Human Rights, a monitoring group with a wide network of activists on the ground, said in the last 24 hours, Russia carried out at least 34 airstrikes in Palmyra and vicinity, areas controlled by IS.

In a statement, NATO spokeswoman Carmen Romero said Stoltenberg later confirmed that NATO generals would be contacting their Russian counterparts about the violation of Turkish airspace.

“It’s unacceptable to violate the airspace of another country,” Stoltenberg told reporters. He said NATO is expressly worried that such acts by the Russians could have unforeseen consequences.

“Incidents, accidents, may create dangerous situations,” Stoltenberg said. “And therefore it is also important to make sure that this doesn’t happen again.”

Turkey’s military said Tuesday that eight Turkish F-16 jet patrolling the Turkish-Syrian border were harassed by a MIG-29 plane as well as surface-to-air missile systems based in Syria in two separate incidents on Monday.

Turkey reported Monday that two Turkish jets were harassed by a MIG-29 on Sunday.

During an official visit to Belgium, Turkish President Recep Tayyip Erdogan welcomed NATO’s stance, and pointedly warned the Russians that if such actions continue, relations between the two neighboring countries on the Black Sea could go into a deep freeze.

“Any attack on Turkey is an attack on NATO,” Erdogan said. “If Russia loses a friend like Turkey with whom it has cooperated on many issues, it will lose a lot.”

A Turkish government official confirmed that Russian Ambassador Andrey Karlov had been called to the ministry on Monday afternoon during which Turkish officials lodged a “strong protest” over the second infringement.

The official spoke on condition of anonymity in line with Turkish government regulations.

On Monday, NATO ambassadors met in special session and condemned what they termed Russia’s “irresponsible behavior” in penetrating alliance airspace. The ambassadors also called on Russia to cease such practices.

On Thursday, NATO defense ministers are scheduled to meet in Brussels, and the actions of the Russian military in Syria and any measures the U.S.-led alliance needs to take as a result will be among the leading topics.

Stoltenberg told reporters he was also concerned that in Syria the Russians are not mainly targeting the Islamic State extremist group, “but instead attacking the Syrian opposition and civilians.”

Russia’s Defense Ministry rejected claims that its airstrikes in Syria are targeting civilians or opposition forces.

Russia says the airstrikes that began last week are targeting IS and al-Qaida’s Syrian affiliates, but at least some of the strikes appear to have hit Western-backed rebel factions. The Russian attacks have largely focused on the northwestern and central provinces — the gateways to the heartland of Assad’s power in the capital and on the Mediterranean coast.

The main Western-backed Syrian opposition group said Russia’s airstrikes have damaged an archaeological in the northwestern village of Serjilla in Idlib province.

The Syrian National Coalition said the attacked area didn’t have any IS presence, adding that airstrikes occurred on Sunday and damaged an Assyrian site.

The group called on the U.N.’s cultural agency UNESCO to condemn the Russian airstrike and preserve archaeological sites in Syria.