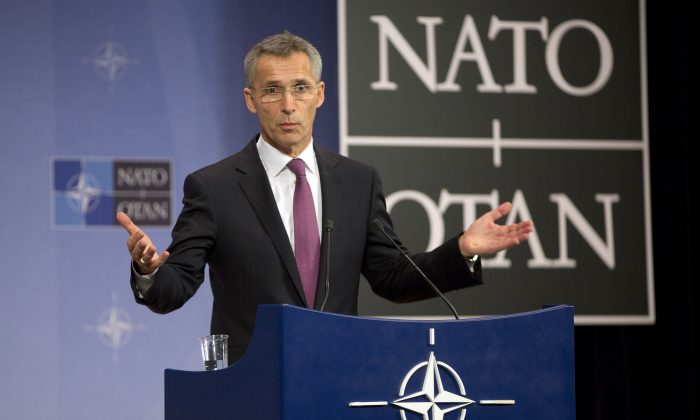 NATO Secretary-General Jens Stoltenberg at a media conference prior to a meeting of the North Atlantic Council at NATO headquarters in Brussels on Dec. 2, 2014. (AP Photo/Virginia Mayo)
International

BRUSSELS—NATO defense ministers on Wednesday approved new multinational reinforcements to beef up defenses of frontline alliance members most at risk from Russia, the alliance’s secretary-general announced.

Jens Stoltenberg said the plan adopted by the United States and NATO’s 27 other members calls for the use of troops from multiple countries who rotate in and out of eastern European member states rather than being permanently based there.

He said military planners will make recommendations on the number and composition of troops needed this spring.

The soldiers “will be multinational to make clear that an attack against one ally is any attack against all allies and that the alliance as a whole will respond,” Stoltenberg told a news conference following the first session of the two-day defense ministers’ meeting.

Getting firm commitments, or even deciding how many NATO troops should be rotated eastward, may take time, however.

Douglas Lute, U.S. ambassador to NATO, said he expected defense ministers to agree on “a framework” but that actual force levels will probably be hammered out only after consultations with NATO’s supreme commander in Europe, U.S. Air Force Gen. Philip Breedlove.

One NATO official, speaking on condition of anonymity because he was not authorized to make public statements, told The Associated Press one proposal under consideration calls for creation of a brigade-sized force: roughly 3,000 soldiers.

On Feb. 2, the Obama administration announced its own plans to quadruple spending on U.S. troops and training in Europe.

U.S. officials say that if Congress approves the $3.4 billion proposal, it would mean year-round presence in Europe of an American brigade engaged in training, mostly in small units sent to the NATO members nearest Russia.

What’s more, enough tanks and other hardware would be stockpiled in advance to equip another U.S. armored brigade whose troops could be airlifted to Europe in case of a crisis. Most of that equipment would be stored in Western Europe, rather than in countries closer to Russia.

A senior NATO official, also speaking on condition of anonymity because he was not authorized to discuss internal alliance deliberations, said the U.S. now hopes its European NATO partners will commit to new investments for deterrence that correspond to the increased funding and troops, equipment and training moves the Pentagon wants.

At Wednesday’s meeting, “many allies” announced how they intend to contribute to NATO’s enhanced presence in the east, Stoltenberg said, but declined to give details. He said the overall goal was to reassure skittish allies and deter Moscow without completely alienating the Russians in the process.

“This is about striking many different balances,” the NATO chief said.

On Monday, Russia’s envoy to NATO warned his country will respond to a buildup of alliance forces near Russian borders. In remarks shown on Russian television, Alexander Grushko said the deployment of NATO forces in eastern Europe “can’t be left without a military-technical answer.”

Stoltenberg said he will be meeting Friday with Russia’s foreign minister, Sergei Lavrov, in Munich, Germany, and will stress that NATO harbors no hostile intent toward Moscow.

“I will underline that what NATO does is defensive, it is proportionate and it’s fully in line with our international obligations when it comes to our increased presence in the eastern part of the alliance,” Stoltenberg said.

Following a request by Turkey, NATO’s defense ministers are also reviewing what the U.S.-led political and military alliance might do to help slow the influx of migrants into Europe by sea.

NATO already has AWACS surveillance planes, air policing and maritime patrol aircraft and an increased number of warships in the eastern Mediterranean under the reassurance measures agreed for Turkey in December, Stoltenberg noted. But he said more time is needed to evaluate how NATO might contribute to easing the migrant crisis, and added that he hoped to be able to make an announcement Thursday.

“We all understand the concern and we all see the human tragedy,” Stoltenberg said.

The International Organization for Migration on Tuesday said 409 people have died so far this year trying to cross the Mediterranean Sea, and that migrant crossings in the first six weeks of 2016 are running at nearly 10 times the rate of the same period last year. IOM said 76,000 people have reached Europe by sea, nearly 2,000 per day, since Jan. 1.

Germany, the leading Europe destination for the migrants, many of whom are fleeing war or poverty in their Middle Eastern or African homelands, welcomed the discussions at NATO.

“It is good that the Turkish government has asked NATO to help for the surveillance of the sea. We are aiming at stopping the business of the smugglers,” German Defense Minister Ursula von der Leyen said.