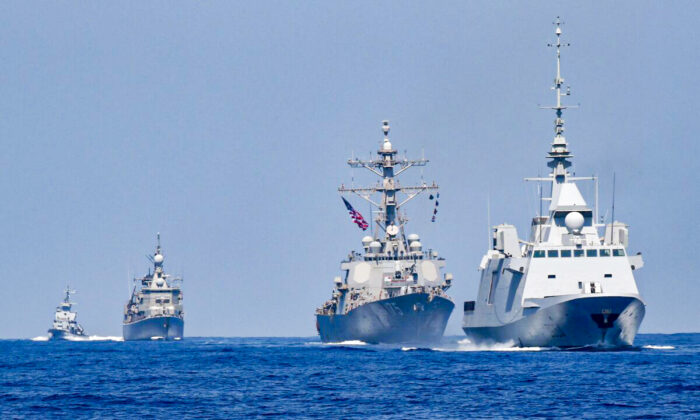 The French anti-submarine frigate FREMM Auvergne (R) and the U.S. Navy USS Donald Cook class guided missile destroyer (2R) and the Greek HS Aigaion frigate (2L) during an exercise how simulate a humanitarian response to a powerful earthquake and significant movement of IDF vessels and foreign vessels in the Mediterranean sea on Aug. 7, 2019. (Jack Guez/AFP via Getty Images)
Russia-Ukraine War

As the conflict in Ukraine enters its third month, NATO and Russia have built up their naval forces in the Mediterranean Sea to the most significant levels in decades.

That was confirmed in a recent interview with Thibault Lavernhe, regional communication officer of French forces in the Mediterranean, who said “Ukraine has changed things.”

“The Americans are back. This hasn’t been the case since the Cold War,” he said. “Russia has doubled, if not tripled, its military capacity in the area” in terms of destroyers, submarines, and frigates, Lavernhe said.

Currently, there are about 20 Russian warships positioned around the Mediterranean, Lavernhe told the AFP news agency. Meanwhile, the United States has doubled its naval presence in the region since the start of the Ukraine war, the official said.

“Where there are American forces, the Russians are there too,” Lavernhe said. “Russian ships are positioned to monitor the activity of allied forces.”

“The role of Truman, with other allies, is to deter Russians from further aggression and to be on constant standby for orders that might be given from our president or from other leaders around the world for the protection of Ukraine and the people of Ukraine,” U.S. Secretary of the Navy Carlos Del Toro told reporters last month.

The trip was announced by Ukrainian President Volodymyr Zelenskyy on April 23, although the State Department and Pentagon haven’t issued public comments on the matter.

The United States and its NATO allies have shown growing readiness to supply heavier equipment and more advanced weapons systems. The UK has promised to send military vehicles and said it was considering supplying British tanks to Poland to free up Warsaw’s Russian-designed T-72s for Ukraine.

Russian forces are attempting to storm the Azovstal steelworks in Mariupol by land, backed up by aerial and artillery bombardment, Ukrainian presidential adviser Oleksiy Arestovych said on April 24.

“Russian troops are trying to finish off the defenders of Azovstal and more than 1,000 civilians who are hiding at the plant,” Arestovych wrote on Facebook. He said on April 23 that troops in the steel complex were attempting counterattacks.