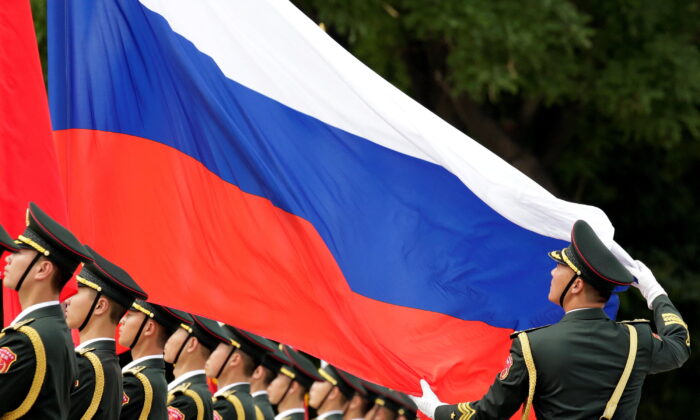 An honour guard holds a Russia flag during preparations for a welcome ceremony for Russian President Vladimir Putin outside the Great Hall of the People in Beijing, China, on June 8, 2018. (Jason Lee/Reuters)
International

Leaders from the UK and Australia have told the NATO summit that the West needs to assert its values globally, or they will risk seeing China and Russia continue to test the rules-based international order.

This comes as NATO issued a declaration saying it will include China in its new strategic concept after identifying the Asian nation challenged the alliance’s “interests, security, and values” and sought “to undermine the rules-based international order.”

Highlighting the critical nature of the Ukrainian conflict to the continuation of global peace, Australian Prime Minister Anthony Albanese and UK Foreign Secretary Liz Truss noted that what was happening in Europe could easily be replicated in the Asia–Pacific region.

“Australia understands very much that what is playing out there has consequences in our own route. If an authoritarian state can attack a sovereign national state, and seek to enforce its will through brutal military power, then that has implications for the entire region,” he said at the NATO summit’s open forum.

“So it’s got to be seen in that in that context, as well, which is why Australia, along with our friends here in NATO, see that we need to reassert our values in return.”

The Australian prime minister said he believes China is intrinsically tied to the Ukrainian conflict, with Russia using the partnership without limits with China to shore up their invasion plans.

“As Russian forces were being mobilised on borders, while the Olympic Games were going on, you had the partnership without limits signed between Russia and China, and that was part of the process leading up to the Russian invasion. And that, I think, shows how interconnected China and Russia were,” Albanese said.

“China seeks to be the most powerful nation in the world. That’s what we’re seeing playing out here.

“Just as Russia seeks to recreate a sort of Russian or Soviet Empire, the Chinese regime is seeking friends, whether it be Russia or in the region, through financial through economic support to build up alliances and to undermine what has historically been the Western alliance in the Pacific.”

China Could Make a Strategic Miscalculation

Echoing the Australian prime minister’s comments, Truss said the Ukrainian conflict was intrinsically tied with the threat to global peace, saying that the West needed to defeat Russia to send a message to Beijing.

“My very strong message is we have to defeat Russia first and negotiate later, and I completely agree with the Australian prime minister that we need to think very carefully about the messages we’re sending to President Xi. We’ve seen increased collaboration between Russia and China, and we know that China is watching closely, they expanding their military capability and there extending their global influence,” Truss said.

“I do think that with China extending its influence through economic coercion and building a capable military, there is a real risk that they draw the wrong idea, which results in a catastrophic miscalculation, such as invading Taiwan. And that is exactly what we saw in the case of Ukraine as a strategic miscalculation by Putin.”

Truss also spoke freely on the topic of helping Taiwan defend itself, saying that it was “so important that the free world work together to help ensure Taiwan is able to defend itself.”

She noted that the UK was working to make sure Taiwan had meaningful participation in international organisations and had strong economic ties with Taiwan.

“This isn’t just about hard security,” Truss said. “It’s also about economic security. I think the lesson we’ve learned also from the Ukraine crisis is the increased dependency of Europe on Russian oil and gas contributed to a sense in which Russia felt enabled to invade Ukraine because they knew it’d be very difficult for Europe to respond.”

The foreign secretary called on the alliance members to also remember not to become strategically dependent on China and to make sure that allies around the world have alternatives to China.

“We also need to learn that lesson, I believe, with China, of not becoming strategically dependent on China, and in fact, making sure that we have strong alternatives. And not just that the free world has strong alternatives that also allies such as the Pacific Islands, that the prime minister was talking about. Allies in Southeast Asia, allies in Africa and the Caribbean also have alternatives to China’s economic investment.”

The comments from Albanese and Truss come as Beijing has subjected Australia to economic coercion through trade sanctions on wheat, wine, barley, coal, seafood, honey, wood, and meat products. It has also delivered a 14-point list of grievances it said would need to be addressed before diplomatic relations could be normalised.

Australia has pushed back on Beijing’s demands, with the prime minister repeatedly saying that even with “the change of government that our values don’t change, our compassion and a trade-off our values for short-term economic interest will not be done, either.”

China’s new ambassador to Australia, Xiao Qian, has said the country is bearing the brunt of China’s displeasure for banning Chinese state-owned telecoms company Huawei from the country’s 5G network over security concerns and the call for an inquiry into the origins of the coronavirus.

But Australia isn’t alone in earning the Chinese regime’s ire. Truss noted in the forum that Beijing was also starting to put pressure on non-Asian-pacific countries such as the UK and on international organisations like NATO.