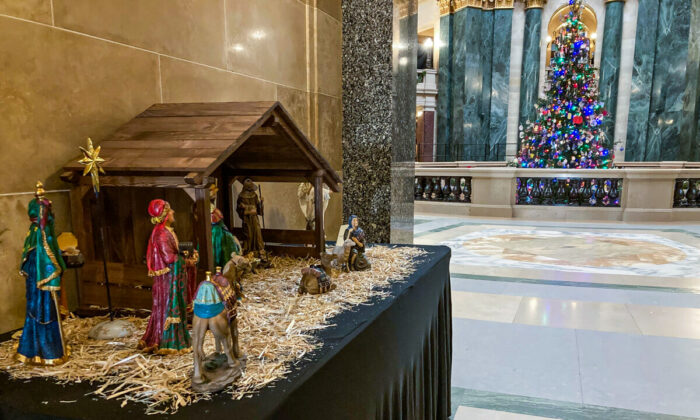 A traditional Nativity scene is tucked in an alcove on the second level of the Wisconsin State Capitol in Madison on Dec. 4, 2021. (Joseph Hanneman/The Epoch Times)
US Features

Nativity Scenes on Display at 40 State Capitols This Christmas Season

After a year of court battles over government-ordered church closures and ignored religious objections to COVID-19 vaccines, two Illinois groups say they have the perfect societal antidote—Nativity crèches celebrating the birth of Jesus Christ displayed inside 40 state capitol buildings from New Hampshire to Hawaii.

It’s the ninth year of a partnership between the American Nativity Scene and the Thomas More Society, a religious-liberty law firm, that’s focused on promoting and placing Nativity scenes in state capitols and in other public venues. The 40 state capitol sites are a 25 percent increase from last Christmas and nearly double the number from 2018.

“We’re very excited about the possibility of getting to 40,” Ed O’Malley, president of the American Nativity Scene in Prospect Heights, Illinois, told The Epoch Times. “It looks pretty good, but we’re not there yet.”

With funding from an angel donor, American Nativity Scene provides two-foot-high figures depicting the baby Jesus, Mary, Joseph, and an angel to private groups who wish to display a Nativity scene in the public square. The local groups provide a manger and straw, then work with staff at the government venues to obtain any needed permits.

Since 2013, the group has shipped more than 400 Nativity scenes for display at capitols and other sites. If local volunteers encounter any resistance, the Thomas More Society steps in, going to court when necessary, to secure the constitutionally protected right to religious speech.

“The ability to do this is a good response to what has happened in society the last couple years,” O’Malley said. “It’s not going to make a huge change, but I think it will make a change.”

American Nativity Scene was founded in 2012 when O’Malley’s father-in-law, James Finnegan, sought permission to place a Nativity scene at the city-owned North Park in Arlington Heights, a Chicago suburb. After some resistance by the city and its park district, the Thomas More Society intervened and secured the group’s right to display the manger alongside other holiday displays.

Soon, the idea expanded to placing crèches in state capitols.

“One of the benefits is the people and their enthusiasm with it and their excitement about the opportunity to do something to freely exercise our faith in the public square,” said O’Malley, who assisted Finnegan and eventually took over leadership of American Nativity Scene.

“That alone I think is important for our country and our world that we can do that. Not every place in the world can let you do that, but here, that’s the First Amendment, the free exercise of religious speech.”

One of the new sites will be at the capitol building in Cheyenne, Wyoming.

American Nativity Scene approached volunteer Steven Melia, and he took up the challenge. He said a friend is building the stable; Melia put through the paperwork to secure a spot inside the Wyoming Capitol. Gov. Mark Gordon has been invited to the dedication, which will take place sometime between Dec. 17 and 22. Volunteers from the Cathedral of St. Mary, St. Joseph Catholic Church, and Holy Trinity Catholic Church in Cheyenne are working on the project.

“So we’re trying to get that in there, bring Christ back into the public square, so people don’t forget about him. To me, that’s really important,” Melia told The Epoch Times.

A crucial legal battle over Nativity displays on public grounds was fought in Chicago around Christmas in 1987. William Grutzmacher received verbal permission from a city building commission official to place a life-size Nativity display on the Richard J. Daley Center Plaza in downtown Chicago from Dec. 20–27, 1987. That permission didn’t last long once the 12-by-12-foot display was up.

“A few calls must have been made,” Thomas Brejcha, president and chief counsel at the Thomas More Society in Chicago, told The Epoch Times. “They came down from the office of the commission with crowbars and attacked and dismantled his Nativity scene.”

The figures of the Holy Family ended up in a dumpster before being rescued by volunteers. Seven of the 21 figures in the display were saved. Meanwhile, Thomas More Society attorneys went to federal court and secured a temporary restraining order from U.S. District Judge James B. Parsons.

“He put a stop to the destruction,” Brejcha said.

Richard Daley, then Cook County state’s attorney and later the longest-serving Chicago mayor, ripped the building commission for asking the Nativity group to post a $100,000 cash bond, and for tearing down the display.

“This is a season that’s celebrated by people from all walks of life,” Daley said. “It is a time for religious displays. The plaza is a public place.”

Grutzmacher’s lawsuit against the Public Building Commission of Chicago stretched into November 1988. Judge Parsons issued a permanent injunction ordering the city to abstain from religious discrimination and provide use of Daley Plaza to all applicants “without discrimination and without regard to the content of their expression, religious or otherwise.”

Parsons said the city’s administration of the plaza “may never be properly performed by saying to any one type of user against the other, ‘It is easier for us to administer the city’s properties if no religionists come aboard. We would prefer not to have religionists of any type aboard our Daley Plaza.’ What a revolting and ridiculous position to be taken here in the United States of America and presumably under the mandate of our Constitution.”

Inspired by the annual Nativity display at Daley Plaza, the Thomas More Society helped get a Christmas crib placed in the Illinois Capitol in Springfield in 2008.

In many places where Nativity scenes are displayed in public, atheist groups place counter-displays decrying religious presence in government buildings.

In the Wisconsin State Capitol in Madison, the Freedom from Religion Foundation placed a display with what the group calls a “slightly blasphemous” display, depicting Thomas Jefferson, Benjamin Franklin, George Washington, and the Statue of Liberty gazing down at the Bill of Rights placed in a manger.

Next to the cardboard cutout is a sign that reads: “At this Season of the winter solstice, join us in honoring the Bill of Rights, adopted on Dec. 15, 1791, which reminds us that there can be no religious freedom without the freedom to dissent. Keep religion and government separate!” The display is directly adjacent to the Nativity scene.

O’Malley said he’s not bothered by such protest displays.

“They’re putting it up only to counter our message,” he said. “We’re putting things up for people to recognize the importance of Christmas and the real meaning of it and the true meaning of it.”