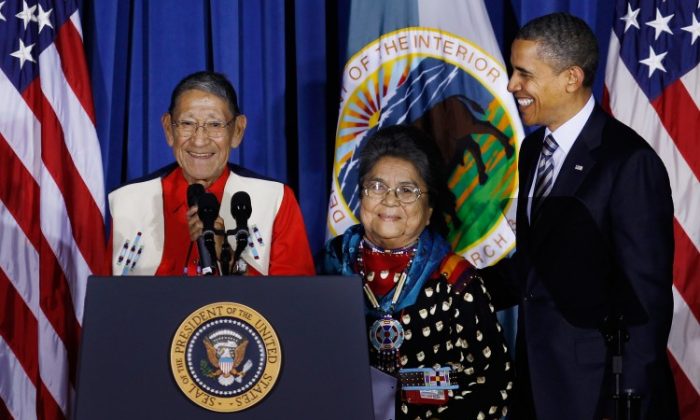 Mary Kim Titla (L) of the San Carlos Apache Tribe is shown with Lynn Valbuena (C), Chairwoman of the Tribal Alliance of Sovereign Indian Nations, and her husband Stephen Valbuena at the Senate hearing for the Committee on Indian Affairs in Washington, D.C., Nov. 29 . (Shar Adams/The Epoch Times)
US

WASHINGTON—When American Indian Andrew Lee as a young college graduate took a job in New York’s financial sector, he struck up a conversation with an older man in the street. He asked if the man had seen a recent newspaper article on American Indians. The response still rings in his ears.

“‘Yes, but I think they got it right in South America by wiping out the indigenous population,'” Lee said, quoting the encounter.

That was in the 1990s. Lee went on to befriend the man, an influential figure on Wall Street.

“He eventually came to support the dignity, strength, and diversity of this country’s first peoples,” Lee said as he spoke before the U.S. Senate Committee on Indian Affairs Nov. 29.

Andrew Lee went on to do great things after that encounter, becoming an executive at one of America’s largest health insurers. He now serves as a trustee on the Smithsonian’s National Museum of the American Indian, and has been selected as a Young Global Leader of the World Economic Forum.

A mixed heritage native from New York state’s Seneca Nation, Lee said the encounter with the man taught him the importance of “changing attitudes.” It was a theme that featured at last week’s Senate hearing, titled Reclaiming Our Image and Identity for the Next Seven Generations.

Lynn Valbuena, chairwoman of the Tribal Alliance of Sovereign Indian Nations (TASIN) and a witness at the hearing, shared with senators the image problems Native Americans face. Last century the image was of “a feather bonnet-wearing Indian living in a tepee,” she said. Now it is combined with the “the drunken Indian.”

According to Valbuena a 2010 opinion poll conducted by the Tribal Alliance in California revealed that almost two-thirds of respondents perceived a high degree of alcoholism and substance abuse among Indians living on reservations. She added that such abuse is higher among Indians than the general population, but less than among other racial groups.

There are more than 2.9 million American Indians and Alaska Natives living in the United States, according to a 2010 U.S. census, and about one-third live on reservations. Both on and off reservations, however, poverty rates remain high, with over a quarter of Native Americans living in poverty.. School drop out rates remain high and housing and health care services wanting.

The rise of casinos and gaming on reservations following the 1988 Indian Gaming Regulatory Act (IGRA) has added a new dimension. While it has given tribal nations greater economic opportunities and possibilities for greater self-determination, its success has also created another image, Valbuena said, “that every Indian is wealthy and owns a casino.”

Of the 566 registered Indian tribes in the United States, 236 run gaming operations, with revenue generated from Indian gaming reaching $26.5 billion in 2009, according to the National Indian Gaming Commission (NIGC).

This has created new problems and policy challenges, Valbuena said, as some states even demand reservations contribute to state budget crises.

Lynn Valbuena believes much of the dysfunction within tribes is associated with negative stereotypes, creating low self-esteem and shame among the young.

“Low self-esteem, which has been linked to academic performance and social adjustment, has also been identified as a factor in Native youth’s historically low high school graduation rates and high suicide and homicide rates,” she said.

Former TV news reporter Mary Kim Titla of the San Carlos Apache tribe in Arizona said reclaiming identity is integral to creating positive stereotypes, but it is becoming more difficult. Two out of three eighth-grade American Indian and Alaskan Natives know little or nothing of their Native history or heritage, she said.

In the San Carlos school district only 1 student out of 900 in elementary school is fluent in Apache. “Native education is in a state of emergency,” Titla told the Senate Committee.

Titla appealed to lawmakers to help pass the Native CLASS Act, which is designed to address problems in Native education, including allowing more tribal control and helping to revitalize languages.

Andrew Lee would like to see more positive stories about Native Americans and their achievements but believes key to any transformation is reclaiming not only their image, but also more say over their lives.

There are many American Indian success stories, he said, with more work to be done.

“Astonishing success is possible when tribes seize control of their own futures, spend less time blaming others for their problems and instead put themselves in the driver’s seat for decision making,” he said.

Following November’s American Indian Heritage month, President Obama will host the White House Tribal Nations Conference at the Department of the Interior Dec 5. It will be the fourth such conference under the Obama administration, and includes invitations issued to representatives from each of the 566 federally recognized tribes.