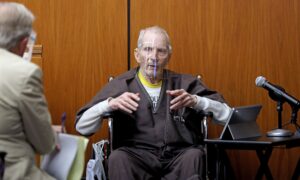 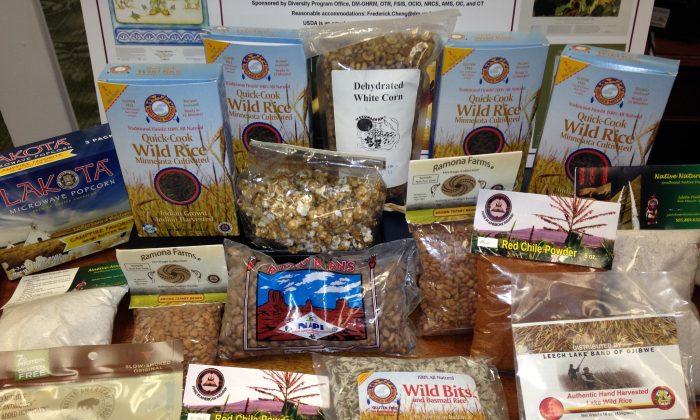 A sampling of foods produced for sale by Native American businesses. (John Lowery / USDA)
US

Native American businesses generate more than $39 billion in annual income and employ around 208,000 workers, according to the U.S. Small Business Administration. Ranging from charter schools and financial institutions, to construction and gambling businesses, they successfully combine community strengths with entrepreneurship.

Tribe-owned businesses have allowed Native Americans to re-invest and create new enterprises within their communities. However, a new study by the Frontier Centre for Public Policy (FCPP)—based in Manitoba, Canada—shows that younger Native American entrepreneurs in the United States are also realizing broader opportunities beyond reservation lands and stereotypical casinos.

“Indigenous Entrepreneurship in the United States of America“ is a Sept. 10 report by FCPP research fellow Joseph Quesnel, a Métis Canadian with European and aboriginal, or First Nation, ancestry. His latest 12-page article features six stories from Native American entrepreneurs of diverse backgrounds and trades. They have two things in common: the realization that reservation economies limit their businesses and a belief that tribes should grant members wider and more explicit property rights.

Perhaps given the communal nature and relative isolation of reservation property, it is digital businesses that have allowed more tech-savvy tribe members to work around the constraints of reservation economies. For example, 46-year-old consultant April Tinhorn from the Hualapai reservation of northern Arizona is supporting other Native American businesses throughout the country in developing their websites and expanding their customer bases.

Ben Chavis’s business ventures, for instance, are not necessarily related to tribal matters. He realized that real estate could be more profitable, and he now believes that “American Indians should own their own land and not live on reservations set aside for them.” He is a 60-year-old member of the Lumbee tribe of North Carolina who, from a young age, took every business opportunity he stumbled upon to survive.

Native American lands are usually held in trusts and subject to tribal authority. Their usage is limited, and tribes frequently have to ask the federal government for permission for new ventures. Because of tribal ownership, individual Native Americans cannot rely on personal savings to start a business or pledge land as a collateral for business loans.

The report rightly recommends a legal overhaul of Native American reservations to encourage entrepreneurship. If members of the tribe are admitting the system does not work for them, Quesnel believes the time has come for change.

The report’s inference is that, without deep reforms, more Native Americans will depart, and reservations will become economically unsustainable and ever more dependent on taxpayer support. Native Americans and Alaska Natives, as reported by the U.S. Bureau of Labor Statistics, have the lowest labor-force participation of any race or ethnicity. Their unemployment is almost double the national rate, and the disparity is notably worse when focusing on reservation-based Indians.

For Pride, Not Just Profit

The six case studies presented by Quesnel highlight how Native Americans show entrepreneurial attributes. Some of the noted success stories include luxury businesses such as handcrafted jewelry, artisan chocolate, music, and clothing.

For instance, Gary and Carmen Davis have risen to the top of the industry in music production, consultancy, and apparel. They now encourage other Native Americans through their multimedia company Native Business, where they share the challenges that other fellow entrepreneurs and artists have had to overcome.

In an interview with Entrepreneur magazine, Gary Davis stresses the resilience that indigenous people “have demonstrated over centuries of pushing forward, finding ways to survive under the harshest of economic conditions.”

He knows that doing business within tribal communities “can be a complex endeavor,” due to the lack of business skills and resources. However, instead of turning to the federal government, Davis believes Native Americans should “become self-sufficient and provide for themselves.”

Davis’s vision is a web of partnerships and investors that would allow Native American-owned businesses to support each other and amplify their reach.

As documented by Peruvian writer Alvaro Vargas Llosa in his 2013 book “Lessons From the Poor,” indigenous communities throughout Latin America are no strangers to entrepreneurship. Often faced with dire poverty, they have learned to be thrifty and form non-state institutions.

In Panama, the isolation of shared lands from cities impedes their access to credit and other financial services. Nevertheless, indigenous women in rural areas have set up and manage their own small banks with savings accounts. These and other local initiatives have supported indigenous families who want to expand their homes, buy better seeds for agriculture, or travel abroad.

Barriers in traditional institutions have forced many indigenous tribes to provide financial services to other members of their communities. In many Latin American tribal or rural towns, there is at least one financial entrepreneur supporting his peers.

A particular story from Ambato, Ecuador, stands out. More than two decades ago, 38 members of the Chibuleo community created a credit union called Mushuc Runa (New Man). They got the official registry in 1997, and the company now operates in several Ecuadorian cities, including the nation’s capital, Quito. The Chibuleo have even diversified, and they founded a soccer team 15 years ago that has played in Ecuador’s premier league.

Quesnel acknowledged in a July paper that, at least in Canada, some of the remote reservations may always struggle to find economic viability. In such cases, when property rights and entrepreneurship prove insufficient, he offers the New Zealand Maori approach of facilitating aboriginal or Native American community life in cities. That way, rather than fighting against economic drivers, Native Americans can retain their languages and aspects of their culture while also engaging in successful entrepreneurship and garnering economic independence.