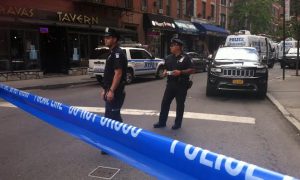 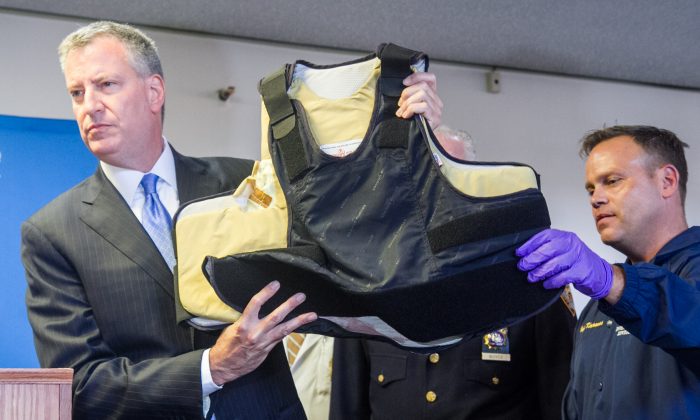 Acting on a tip, officers were trying to execute a warrant for Mozdir’s arrest in a tiny West Village smoke shop when a shootout ensued that ultimately left the suspect dead, according to officials.

Mozdir, who police said had changed his appearance, shot one 20-year veteran NYPD officer with a .32-caliber revolver in “very close quarters,” according to NYPD Commissioner William Bratton. Bratton also said that 20 spare rounds were found in the man’s pocket. The 45-year-old male NYPD officer, whose name was not released, was saved by a bulletproof vest. One marshal was shot in the elbow and another in the buttock.

All three officers were taken to Bellevue Hospital where they were in stable condition and described by Mayor Bill de Blasio as in “good spirits.” Mozdir was pronounced dead on arrival.

Police said that Mozdir fired first and then the officers returned fired.

“The marshals arrived and some undercover officers were there,” said eyewitness Carl Lugo on Monday afternoon near the scene, at Smoking Culture. “I heard the gunshots and we took off.”

Mozdir, who was wanted in connection with two different incidents of child molestation in California, had been on the run for more than two years. A recent broadcast about his case was featured on CNN’s “The Hunt with John Walsh.” According to the show, in 2012 Mozdir was arrested for child molestation, child pornography, and bestiality in Coronado, Calif., near San Diego. He disappeared after being released on bail.

Though the Coronado Police Department and U.S. marshals searched for Mozdir in Georgia, California, and even Mexico, the last known sign of him was in June 2012 when his abandoned vehicle was found hidden in the brush in Georgia. A former roommate had once told authorities that Mozdir had two guns and made threats to murder one of his victim’s fathers and to commit suicide, according to the show.

On Monday, Bratton and Manhattan Chief of Detectives Bill Aubrey stated at the scene that Mozdir was “shot during an exchange of gunfire” with police working for the Regional Fugitive Taskforce—a combined effort between U.S. marshals and local law enforcement officials.

Bratton said the task force has about 20 NYPD detectives on it, and is one of several that the NYPD is part of.

“Policing the city is dangerous,” said Mike Palladino, president of the Detective’s Endowment Association, as he left the scene Monday. “It’s very difficult and sometimes violent.”

Many shops—just a few doors away—neither saw nor heard the multiple shots being fired. Afterward, though, they were kept inside their stores for hours and area residents were kept out as authorities established a crime scene and cordoned the area off.

“The shop has loud music inside, I didn’t hear the gun shots,” said Avan Kim, a tattoo artist at Moon Sheen Tattoo, which is located near the scene. “They do what they do.”

Others were at least peripherally aware of Mozdir when he was alive.

“I think it’s terrible,” said Ricardo Kowers, an employee at Volare, which is a block away from the scene. “I heard he was working in the barbershop over there.”

Mayor de Blasio praised the task force’s work and the NYPD during a press conference later Monday at Bellevue Hospital.

“We appreciate their bravery, their strength, and their decisiveness,” said de Blasio, who visited all three officers with Bratton. “They made split-second decisions. They have put themselves on the line every day.”