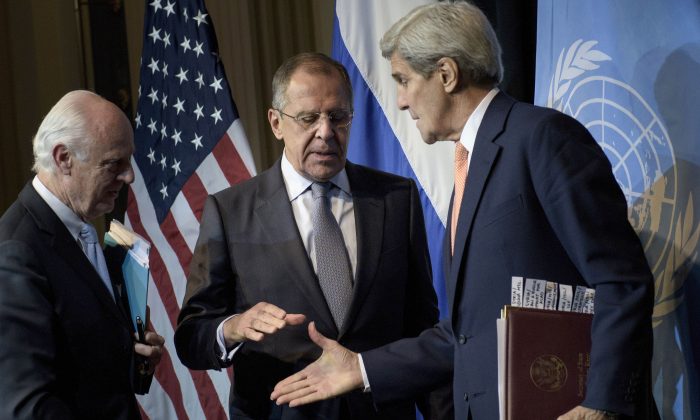 WASHINGTON—The United States escalated its fight against the Islamic State in Syria on Friday, pledging the first open deployment of military boots on the ground, even as U.S., Russian and other diplomats pressed a new peace effort that America hopes will hasten the departure of Bashar Assad.

Up to 50 special operations troops will be sent to assist Kurdish and Arab forces in northern Syria, American officials said. The move marks a significant departure for President Barack Obama, who for years has resisted putting ground forces in Syria even as he has gradually intensified the U.S. military response to what counterterrorism officials worry is a growing Islamic State threat in Syria and Iraq.

The troop announcement came as diplomats in Vienna representing 17 countries and the European Union agreed to launch a broad new peace attempt to gradually end Syria’s long civil war — a declaration that avoided any determination on when President Assad might leave. It is not clear how many rebel groups would agree to a plan that doesn’t result in Assad’s immediate departure.

Any cease-fire agreement that may come as a result of the peace effort would not include the Islamic State, which controls large parts of northern Syria and has its capital there.

But the participation by Russia and Iran in the attempt could mark a new and promising phase in the diplomacy since those countries have staunchly backed Assad.

The White House has long said that Assad’s ouster is essential to its ultimate goal of defeating the Islamic State because the Syrian president’s brutal tactics against Sunni rebels have drawn Sunni radicals from all over the world into the militant group’s ranks.

The Syrian civil war has killed more than 250,000 people and uprooted more than 11 million, sparking a refugee crisis throughout Europe.

Despite killing as many as 12,000 militants, the U.S. bombing campaign has not significantly weakened the Islamic State’s capacity to hold territory, and the group’s ranks have been replenished by foreign fighters and others.

Military experts say ground troops are essential for the fight. A U.S. program to train Syrians was abandoned as a failure, and the new deployment essentially would replace that program.

Speaking to reporters flying with him on an overseas trip, Defense Secretary Ash Carter said this would probably not be the last significant adjustment to the anti-IS military campaign in Syria and Iraq.

“We are going to continue to innovate, to build up what works,” he said.

Friday’s developments came as missiles slammed into a crowded suburb of the Syrian capital. The attack killed at least 40 people, activists said. The Syrian Observatory for Human Rights and the Local Coordination Committees group said government forces fired more than 11 missiles at a market in the suburb of Douma.

In Washington, officials said the new U.S. forces will work from headquarters locations and won’t move to the front lines or be used to call in airstrikes. However, the U.S. has conducted special operations raids into Syria before now and will continue to do more unilateral raids. It helped Iraqi forces rescue hostages last week, and Master Sgt. Joshua Wheeler was killed, the first U.S. combat death in that country since 2011.

White House spokesman Josh Earnest said the new troops will not be on a “combat mission.”

“There’s no denying the serious risk they will be facing,” Earnest said, but their mission will “not be to lead the charge to take the hill.”

Russia and Syria are conducting airstrikes in the country, but Earnest said it was unlikely the U.S. troops would be at risk because Russia has not bombed in the area where they will be.

On Capitol Hill, some lawmakers greeted the troop announcement with dismay.

It “marks a major shift in U.S. policy — a shift that is occurring without congressional debate (and) is unlikely to succeed in achieving our objective of defeating IS,” said Sen. Brian Schatz, D-Hawaii.

On the other hand, Sen. John McCain, R-Ariz., chairman of the Armed Services Committee, said the decision was “another insufficient step in the Obama administration’s policy of gradual escalation.”

One of the groups the U.S. troops will be working with is a Kurdish militia known as the YPG, which could pose a political problem for the United States.

The YPG was accused of war crimes in a recent report by Amnesty International, which documented allegations that the group forcibly displaced Arabs and Turkmen and burned down villages perceived as cooperating with its opponents. The group has denied the allegations and the State Department says it is looking into them.

Carter declined to be specific about where the U.S. troops will operate in northern Syria but said they will be in territory controlled by Syrian Kurds.

“However, the Kurdish YPG and the Syrian Arab coalition essentially work together to counter ISIL,” he said.

In Vienna on Friday, the U.S., Russia and more than a dozen other nations directed the U.N. to start a new diplomatic process between Syria’s government and opposition groups with the goal of reaching a nationwide cease-fire and political transition — but without an explicit demand for Assad to quickly leave power.

American officials say the talks marked a significant new phase, one they hope is an endgame for Assad’s reign.

At a joint news conference with Russia’s top diplomat and the U.N. envoy to Syria, U.S. Secretary of State John Kerry said the countries — including fierce regional rivals Iran and Saudi Arabia — each pledged to support an independent and secular Syria, to maintain the country’s institutions, to protect the rights of all Syrians and to strive to defeat the Islamic State.

Kerry said the U.N.-led process should lead to a new constitution for Syria and internationally supervised elections, as well as an end to violence between Assad’s military and Sunni rebel groups so the world community can focus on the fight against the Islamic State.

But no agreement was reached on Assad.