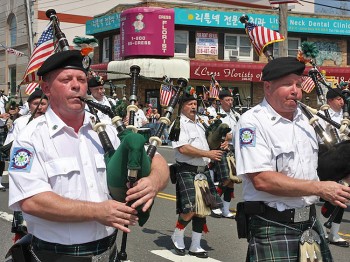 By Zachary Stieber
Print
NEW YORK—Dubbed the largest Memorial Day parade in the nation, the Little Neck Douglastown Memorial Day Parade in Queens attracted an estimated 80,000-plus participants and spectators from across the tri-state area. The tradition is now in its 82nd year.

The parade started at Jayson Avenue in Queens, traveling along Northern Boulevard until it ended at 245th Street. Mayor Michael Bloomberg, City Council Speaker Christine Quinn, and Gov. Andrew Cuomo marched in the parade, waving to the crowd.

Other Memorial Day events around the city included a military jet flyover at the Intrepid Sea, Air & Space Museum at Pier 86 in Manhattan, another parade in Whitestone in Queens, and Mayor Bloomberg's official remarks at the Soldiers and Sailors Monument on 89th Street at Riverside Drive.

“It was pretty hot, but I actually enjoyed it. It was fun with the whole battalion,” said freshman George of Francis Lewis High School.

The ROTC students said they participated in four parades over the holiday weekend, and many others throughout the school year. This was the school's last parade. Some of them will be going to colleges with ROTC programs, while others will not. It is possible that some could be deployed to Afghanistan or Iraq.

“I hope that someday we'll be able to have peace,” stated Cpl. Anthony J. Zollo, who served in the Army during World War II in the Pacific region. While conveying the wish for violence and bloodshed to end, he was proud of the Armed Forces and, although he didn't formally participate in the parade, came out to show his support.

“It's just a wonderful day, to spend the day with the parade in our neighborhood,” Zollo’s wife added. This was their seventh year at the event.

“I've only missed one since 1987,” said Mary, a resident of Douglaston. Her companion said that it was “mostly the same” every year, “unless it rains.”

“It's nice the schools all get together, it's a really nice community event,” Mary added.

Tappan Zee Bridgemen, a professional marching organization, also marched in the parade. Pat, their bandleader, told the Epoch Times that many of them had already played in another parade earlier that day. He also said that the organization is made up of professional musicians from the tri-state area that get paid by local municipalities to enhance parades with professional music. Indeed, their music was noticeably outstanding.