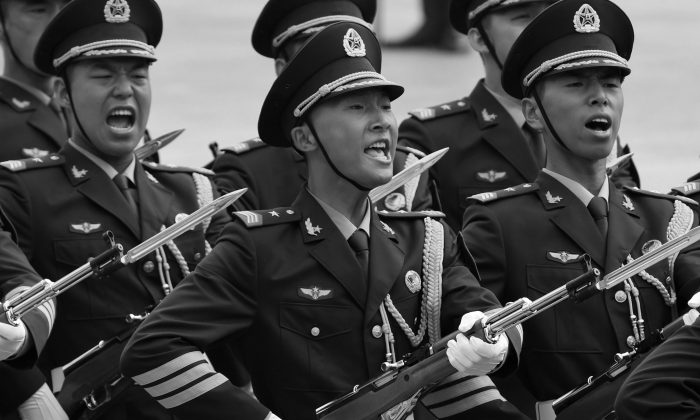 Chinese soldiers shout as they parade in Beijing on July 7, 2014. A debate has broken out inside China's military about whether it should strictly serve the Chinese Communist Party or serve the nation. (Greg Baker/AFP/Getty Images)
Chinese Regime in Crisis

A debate is taking place within the Chinese Communist Party (CCP), the Chinese military, and among the people of China about what role the military should play.

In a recent interview on the Web version of Hong Kong-based Phoenix TV, People’s Liberation Army Maj. Gen. Luo Yuan recounted challenges the Chinese military is facing as the Chinese people’s expectations have changed. The public expects the military to steer away from Maoism and communist ideology, tone down its offensive stance toward other countries, and wean off its involvement in internal Party conflicts.

The key issue that links these complaints: the Chinese people want the military to serve the state instead of the Communist Party.

The calls for nationalizing the military are not just coming from the Chinese people. Commentator Peter Yang wrote in the Hong Kong-based Oriental Daily that the changing [global geopolitical] environment has caused Chinese military chiefs to think more independently.

As a result, these high-ranking officers no longer swear loyalty to the Party and its leaders without question, as they have done in the past and as the Party has expected from them. Yang also conjectured that senior PLA leadership may have held discussions on this topic.

The Party has recently pushed back against the calls for nationalization.

A speech by CCP head Xi Jiping at a political work conference in Fujian Province from Oct. 30 to Nov. 2 reiterated the principle of the Party leading the military.

On Nov. 3, the day after the conclusion of the Gutian conference, the nationalistic Party newspaper Global Times published an opinion piece by PLA Maj. Gen. Luo Yuan titled “Nationalization of the Military Will Lead to the Demise of [our] Party and Country.”

The pushback by the Party is not surprising.

The classic statement of the role of the military in the Chinese regime is an often-quoted statement by Mao Zedong: “Political power grows out of the barrel of a gun.” The call for nationalization of the military threatens the CCP’s unquestioned authority.

Evidence of an ideological struggle within the military itself is visible in the military’s publications, which present the Party countering the arguments for nationalization.

The China Military Online website, which is sponsored by PLA Daily, published a front-page editorial on Oct. 13 warning of “ever sharp and complex ideological warfare” and accusing “Western enemy forces” of “trying to confuse us by advocating the nationalization of the military” and “freeing the military from Party control and political power struggle.”

On Oct. 27, a front-page editorial on the website urged the “importance of obeying the Party’s command under all circumstances.”

These editorials were preceded by two articles in August.

On Aug. 6, the CCP army newspaper warned that “hostile forces” were attempting to use the “nationalization of the military” to shake the military.

On Aug. 11, a PLA Daily report quoted the PLA General Political Department as calling on the military to “resolutely prevent political liberalism.”

The arguments for nationalization are mostly publicly articulated in media outside China.

Chen Kuide, chief editor of the U.S.-based journal China in Perspective has pointed out that in the 21st century, the Chinese Communist Party is the only ruling body in the world to openly oppose the nationalization of the military.

Even in China, Chen points out, such a stance violates the constitution, which stipulates, “The armed forces in the People’s Republic of China belong to the people.”

Zheng Jiwen, editor of Taiwan’s Asia-Pacific journal Defense International told a Voice of America reporter, “Nationalization of the military is an important criteria for [judging the] democratization of a country.

“If the military cannot stay away from infighting among political factions and instead answers to a few individuals or one Party, that would create lots of unimaginable barriers and problems when a country is striving toward democratization and modernization.”

Crisis Within the Party

On Nov. 3, PLA officials were quoted as professing their loyalty and support for Xi Jinping at the military political work conference. It marks the fifth time this year that a number of high-ranking military officials have publicly sworn loyalty for a regime leader, which is rare in Party history. Analysts see it as a sign of a tremendous crisis within the party.

Back in July, Lt. Gen. Liu Yazhou wrote in the influential Party magazine Qiushi Journal that the PLA continued to be held back by the same blind adherence to past practice that led to the Qing Dynasty’s downfall.

He went so far as to predict that the regime would “suffer a fate worse than that of Qing Dynasty” and “large-scale and long-lasting warfare will break out inside the country or along the border.”