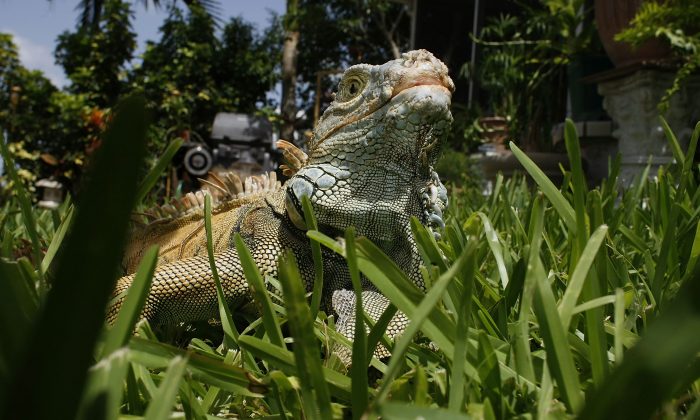 PUNTA GORDA, Fla.–This weekend is expected to be one of the coldest in four years for South Floridians, prompting the National Weather Service in Miami to issue a Falling Iguana Alert via Twitter.

South Florida occasionally sees temperatures dip into the 30s and 40s overnight, which causes the cold-blooded reptiles to become “temporarily stunned,” until temperatures warm up.  They are known to sleep in trees and when immobilized by the cold, they “stiffen and lose their grip on the branches,” and fall to the ground or sometimes on an unsuspecting passerby.

Iguanas are not indigenous to Florida and are considered invasive by the Florida Fish and Wildlife Commission (FWC).  Native to Central and South America and Mexico, they prefer warmer climates, making Florida ideal.  However, when temperatures reach 40 and below, they slip into a cold-induced slumber. Instead of dying, they thaw out and return to be a pest another day.

The FWC first spotted the reptiles in the 1960s around  Miami-Dade County and surrounding areas.  Since that time, the FWC reports that the Florida iguana population has continued to grow.  There have been reported sightings as far north as St. Lucie County and along the Gulf Coast.

The green iguana can grow up to five feet in length and weigh close to 20 pounds.  The No. 1 contributing factor and  “primary source of invasive species in Florida” are those kept as pets, who are abandoned or manage to escape.

However, year-round Florida residents have no love for the green reptiles that have been blamed for threatening the infrastructure, causing erosion of seawalls and collapsing sidewalks as they burrow and lay 50 to 70 eggs per year.

They can also be a nuisance to homeowners and the commercial landscape as they are attracted to trees with foliage and eat almost any vegetable.

The iguanas are not known for hygiene. They leave droppings on docks, moored boats, seawalls, porches, decks, pool platforms, and swimming pools. They are primarily herbivores and have been identified by FWC researchers as damaging the natural environment in Florida.

The remains of endangered tree snails have been found in the stomachs of the green reptiles as well as the Gray Nickerbean, a host plant of the endangered Miami Blue butterfly.  They can also spread salmonella to humans through contact with water surfaces contaminated by their leavings.

The FWC released a statement informing the public that, as of April 2021, they did not need a permit or license to kill the creatures.

“Green iguanas are not protected in Florida except by anti-cruelty laws and can be humanely killed on private property year-round with landowner permission,” the agency said.

People are advised to use caution when approaching an iguana that is thawing out. As they regain their senses they can be quite aggressive.  In 2018, one South Florida man reportedly discovered this when he loaded stunned iguanas into his car in an attempt to save them. Not knowing they would be revived by the warmth in his car, he did not expect to be attacked as they came awake.

The iguana population has exploded in recent years mainly due to record-breaking heat and, until this year, mild winters.

“We’re going through multiple winters that are failing to get as cold as almost every winter did a few decades ago,” Weather Underground climate blogger Bob Henson said in his blog. “This is happening at the same time that iguana populations are multiplying across South Florida.”

Despite the negative aspects, iguanas may be kept as pets, as long as owners obtain a permit from the FWC. In addition to promising to maintain the pet for the life of the animal, owners must tag them with a marked a transponder tag.