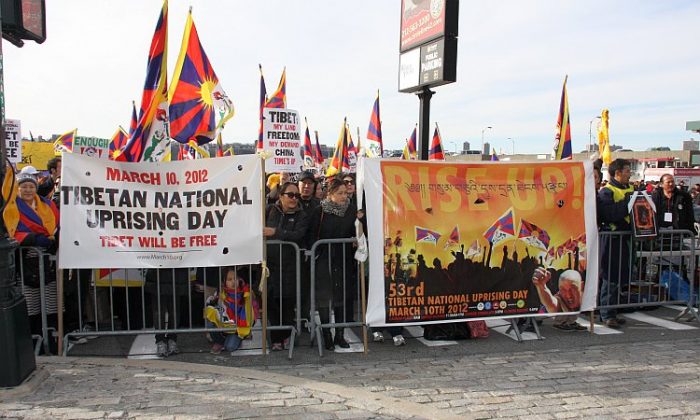 NEW YORK—With Tibetans unable to peacefully appeal for their freedoms inside their homeland, people all around the world took to the streets on Saturday to protest in their honor. The March 10 protest marked the 53rd annual National Uprising Day, with supporters calling on the Chinese regime to withdraw its forces from the once-free nation of Tibet.

Tenzin Choenyi, grew up in Tibet, but moved to the United States in 2005 for a better life. She participated in a protest and rally held in New York City. Living in Tibet under communist rule, she said, was a “life of oppression, life without liberty, and life without freedom.”

Tibet was invaded by China in 1949, and then annexed into Mao Zedong’s communist state in 1951. After a decade of frustration, Tibetans rose up for the first time on March 10, 1959.

They were quickly suppressed, forcing Tibet’s leader, the Dalai Lama, to escape to India where he has remained in exile ever since.

“The Tibet issue concerns far more than the rights and welfare of 6 million Tibetans,” Sangay said in a statement on Tibet.net. “It impacts the entire planet. The unique Tibetan culture, with its rich language, spirituality, and history must be protected.”

The situation in Tibet has grown increasingly tense this past year, with a rash of public self-immolations by monks, nuns, and laypeople protesting China’s occupation of their homeland.

In Prime Minister Sangay’s statement, he reminded everyone the Dalai Lama and the Central Tibetan Administration discourage such action. “Despite our pleas, Tibetans continue to self-immolate with 13 cases already in 2012. Fault lies squarely with the hard-line leaders in Beijing—so does the solution.”

Karma Namgyal, the general secretary for New York-based Tibetan support group Dhokham Chushi Gangdruk, spoke outside of the New York Chinese Consulate on Saturday about why he believes people are self-immolating to get their point across.

“It is very difficult to survive under this brutal communist regime. The only way to show frustration is to give up the one thing you cherish most, which is being alive,” Namgyal said. “So they offer their life by burning themselves to let people know what is happening in Tibet.”

According to Stand Up For Tibet, one of the groups organizing global protests, 26 Tibetans have set themselves on fire since 2009.

In response to the increase in self-immolations, the Chinese Communist Party has recently increased its military presence in Tibet and outlawed all foreign media from entering the region.

Tsewang Rigzin, president of the Tibetan Youth Congress, who was outside the United Nations headquarters on Saturday, is afraid what the media suppression will lead to. “We are very fearful that China will continue the genocide of the Tibetan people without having any international presence in Tibet.”

Rigzin was helping three Tibetans who are on hunger strike outside of the U.N., which began on Feb. 22. In addition to ending the media suppression, the men on the hunger strike want the U.N. to pressure the Chinese regime to stop the undeclared martial law in Tibet, stop the patriotic education, and release all political prisoners.

“The ball is in the court of the U.N. now,” Rigzin said. “Whatever the U.N. wants to happen to these people [that are on hunger strike] that is what will happen.”

The United Nations did not return a request for statement in regard to Rigzin’s comments by press time on Sunday.