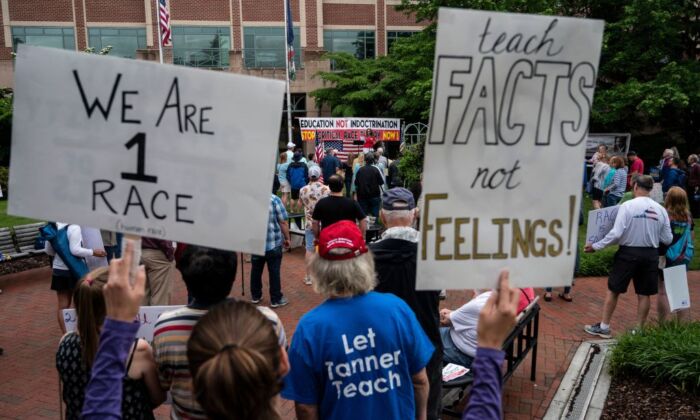 People hold up signs during a rally against critical race theory (CRT) being taught in schools at the Loudoun County Government center in Leesburg, Virginia on June 12, 2021. (Andrew Caballero-Reynolds/AFP via Getty Images)
Viewpoints

It’s true that children are our future, for good or ill, depending on their education. Ill-educate children, as we are doing in the United States and Canada, and the result will be cultural decay, social breakdown, and political decline.

We teach our children that our society is divided between helpless victims and cruel oppressors. BIPOC (black, indigenous, people of color) and females are all and everywhere oppressed, and whites and males, Christians and Jews, and (astonishingly) Asians are privileged, evil villains. Children learn to fear and hate their fellow citizens of other races, sexes, religions, and ethnicities. What kind of society will we have when we teach children that race hatred, sexism, and ethno-supremacy are justified and virtuous?

Children are taught that speaking and writing correct English is racist, and so they must not learn correct English. Math too is racist, when really, there are no correct answers, and to deny that two plus two can equal anything is oppressive. The demand for correct answers, logic, and scientific proof are sins of “whiteness” that must be eradicated from the socially just society. Thus, it isn’t a weakness that American children perform poorly on international tests of reading, math, and science, but a demonstration of virtue, of social justice.

When schools teach the counterfactual lie that police every day murder innocent black and brown people, a lie refuted by every serious study, is it a surprise that police are viewed by black and brown children with fear and hatred? The constant insults and attacks on police by BIPOC children as well as adults are a predictable result of such inculcation. So too is the low morale of police in almost all urban jurisdictions, their unwillingness to engage in proactive policing, the flood of resignations, early retirements, transfers to rural jurisdictions, and suicides, and the lack of recruits to fill the large gaps in almost every urban police force. It’s no surprise that the crime rate has shot up in every urban jurisdiction.

Race and gender disparities in academic participation and performance are explained by one and only one possible factor: racist and sexist discrimination. The other likely causes—family weakness in single-parent homes, community pathologies, and individual choices—may not be mentioned or investigated. In this way, disparities in participation or performance are deemed illegitimate, and therefore must be wiped out in order to achieve “equity,” that is, equal results among census categories of the population, and “social justice.” Thus, poor performers are “victims,” and measures must be taken to ensure that outcomes are the same. This is done by giving preferences to underperforming BIPOC pupils and students, canceling accelerated programs for which they do not qualify, canceling examinations in which they do poorly, and setting aside performance standards. Programs in which females are underrepresented must prioritize recruiting females through special preferences and benefits.

BIPOC pupils and students are taught that their academic participation and performance is not their responsibility, but the responsibility of others who victimize them, and who owe them preference, benefits, and reparations. This is the perfect pedagogical plan for destroying individual motivation and a sense of responsibility. There’s always someone else to blame.

In order to advance “equity,” based on demographic “representation” of race, sex, ethnicity, etc., alternative criteria for judgment, such as individual achievement, merit, and potential, are denounced as, you know, “racist,” and rejected. So recruitment to academia, science, media, professions, and government will be of the demographically underrepresented, not of the most capable candidates. The foundation of this plan is the racism of low expectations, assuming that people from BIPOC categories could never make it on merit. This guarantees mediocrity or complete incompetence throughout our institutions: in medical care, scholarship and teaching, engineering, the press, law, and governance. The consequent trajectory is a societal decline and decay.

Female pupils and students are taught that they are being excluded due to sexist discrimination. This counterfactual claim ignores the reality that females are the majority in universities and in most schools and programs. Those few programs where they are not, in spite of all of the heavy recruiting—physical sciences, mathematics, computer science—is a result of the choices of females who prefer to enter other fields. Yet females are continually told that they are victims of sexist discrimination. And male pupils and students are told that non-existent female victimhood is their fault.

Given the understanding that reason, logic, the search for evidence and correct answers, and science are taught as features of oppressive “whiteness,” it should come as no surprise that schools discourage students from basing their understandings on scientific facts. A particular focus of teaching from kindergarten through graduate studies is the rejection of biology and its knowledge of biological factors in human life. Biological sex is now taught to be irrelevant to human life; the only thing that counts is one’s feelings about gender.

Children are taught that they can be any of a hundred genders that they choose. Some teachers groom children to be supporters and “allies” of LGBTQ+, and to join in wherever they choose. Some children who are uncomfortable with their sex or confused about it are in some schools recruited into the trans community. Schools funnel pupils to sex transition clinics run by people, who still call themselves doctors, where children are subjected to life-changing chemical treatments and surgical mutilation in the futile effort to transform children from their biological sex to a replica of the other.

What devious force brought all of this cultural destruction into being? Who injected this destructive poison into our educational system? The source, of course, is our universities. They were taken over by grievance studies advanced by various particular interest groups. First and most decisive were the feminists who established women’s and gender studies to advance what they defined as the narrow interests of women. They adopted the Marxist model of society divided into two warring classes; in place of the proletariat versus the bourgeoisie, they defined the conflicting classes as females versus the patriarchy, all men. The feminists inspired queer studies and LGBTQ+ activism. Black studies, Latinx studies, and Asian studies all championed their races in alleged conflict with the other races. Universities no longer were about what can we learn about the world and its people, but about what you could do through propaganda and activism to advance the narrow interests of your category.

All of these activisms were absorbed in social science and humanities programs, often by joint appointed professors with one or another grievance study. Administrators were either activists themselves or were won over and instituted “social justice” measures of “diversity, equity, and inclusion,” hiring “diversity officers” to police the staff and students to ensure that no “wrong think” was allowed to flourish. Faculties of education, being weak in academic content and lax in pursuing that, adopted grievance theory with a vengeance, and trained their students, the future school administrators and teachers, in the most radical forms of grievance activism. The faculties of education have contaminated our K-12 schools and made them what they are now.

My modest suggestion would be to abolish faculties of education entirely, defund the social science and humanities, disband all grievance programs, fire all diversity officers, and ensure that, in the United States, the First Amendment, and in Canada the Charter of Rights and Freedoms, was respected in all educational institutions that receive federal funding. These measures might stem the galloping damage that is being done to our societies by our increasingly lunatic educational systems.