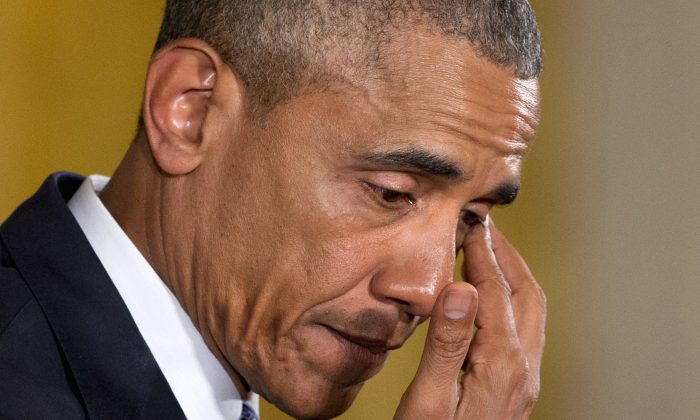 An emotional President Barack Obama pauses to wipe away tears as he recalled the 20 first-graders killed in 2012 at Sandy Hook Elementary School, while speaking in the East Room of the White House in Washington, D.C., on Jan. 5, 2016. (AP Photo/Jacquelyn Martin)
US

“President Obama’s executive orders will do nothing to improve public safety. #2A #fact,” the the nation’s largest gun lobby tweeted as Obama was speaking at the White House.

Obama wiped back tears as he mentioned the children killed during the mass shooting at Sandy Hook Elementary School in Newtown Connecticut in December 2012. Obama said he doesn’t expect gun laws to change during the remainder of his term in office, but pledged he would do more in the lead-up to the November election.

“The American people do not need more emotional, condescending lectures that are completely devoid of facts,” top NRA official Chris Cox said in a statement.

“The men and women of the National Rifle Association take a back seat to no one when it comes to keeping our communities safe. But the fact is that President Obama’s proposals would not have prevented any of the horrific events he mentioned. The timing of this announcement, in the eighth and final year of his presidency, demonstrates not only political exploitation but a fundamental lack of seriousness.”

Cox added that Obama has “chosen to engage in more political rhetoric,” saying it “doesn’t match his record.”

“The proposed executive actions are ripe for abuse by the Obama Administration, which has made no secret of its contempt for the Second Amendment. The NRA will continue to fight to protect the fundamental, individual Right to Keep and Bear Arms as guaranteed under our Constitution. We will not allow law-abiding gun owners to be harassed or intimidated for engaging in lawful, constitutionally-protected activity—nor will we allow them to become scapegoats for President Obama’s failed policies,” the NRA said.

“The Constitution is the foundation of our government, and I will not sit back and let this president pick and choose which parts to uphold,” Williams tweeted.

And GOP presidential candidates took shots at the president.

“Barack Obama is obsessed with undermining the Second Amendment,” Florida Sen. Marco Rubio stated. “This executive order is just one more way to make it harder for law-abiding people to buy weapons or to be able to protect their families. It’s going to do nothing to prevent violence or crimes because criminals don’t buy guns that way.”