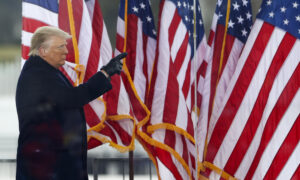 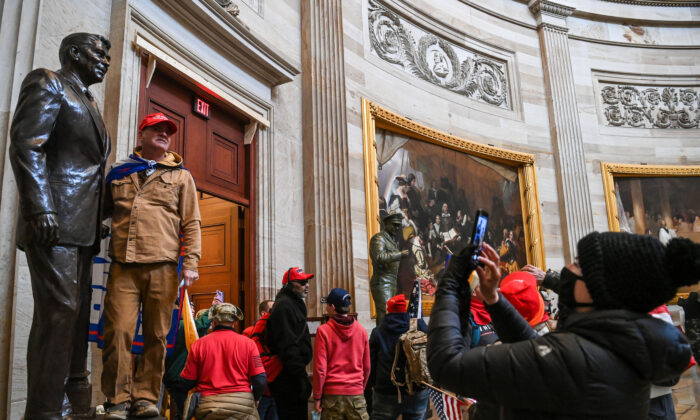 A group of protesters enter the U.S. Capitol Rotunda in Washington, on Jan. 6, 2021. (Saul Loeb/AFP via Getty Images)
Politics

Leading organizations for members of the press are calling for criminal investigations against individuals who threatened or attacked journalists during protests at the U.S. Capitol.

“Journalists are witnesses and rarely in the history of our country has the work of reporters been more important than on January 6, 2021, in documenting the deadly insurrection that nearly toppled our government,” National Press Club President Michael Freedman and National Press Club Journalism Institute President Angela Greiling Keane said in a statement.

“They are important chroniclers of democracy. Press freedom is a key tenet of American democracy and democracies worldwide. Journalists’ ability to do their jobs and operate unimpeded by threats and violence is protected by the First Amendment of the U.S. Constitution. Any attempt to interfere with that right should be investigated and wrongdoers prosecuted.”

Civil unrest and acts of violence at the U.S. Capitol marred otherwise peaceful protests on Jan. 6. A group of rioters and some protesters waving American and Trump flags illegally stormed the Capitol building as lawmakers were counting electoral votes in a joint session of Congress. Clashes in the area on the day left five people dead and dozens of police officers injured.

Michael Sherwin, acting U.S. attorney for the District of Columbia, announced on Jan. 7 that 55 people had been arrested and charged in Washington and federal courts in connection to violence that interrupted lawmakers and Vice President Mike Pence debating whether or not to count electoral votes for Arizona. Since then, dozens more have been charged in state and federal courts.

Rep. Tim Ryan (D-Ohio), who chairs the Appropriations Subcommittee on the Legislative Branch, told reporters on Monday that the USCP is cracking down on all individuals involved “that potentially facilitated, on a big level or small level in any way,” in the assault on Capitol grounds. The USCP investigations are still ongoing.

Corporate media, lawmakers, former officials, and other critics are blaming President Donald Trump for Wednesday’s incident, with some calling for his impeachment. Earlier that day, the president addressed a crowd in Washington D.C. where he reiterated his allegations about election irregularities and fraud, and his dissatisfaction with the media and several lawmakers. At 12:16 p.m., he encouraged protesters to “peacefully and patriotically make your voices heard” at the planned protest outside the Capitol.

As thousands of protesters moved their demonstration to the U.S. Capitol, small pockets of violence were reported during clashes with police and media, while the vast majority of protesters remained peaceful. At 2:15 p.m., a small subgroup began rioting, smashing windows in an attempt to enter the Capitol building as other protesters tried to stop them. Shortly after, at 2:38 p.m., Trump started posting on Twitter, urging protesters to “Stay peaceful.” He continued his urge for peace and respect for law enforcement throughout the afternoon, until he was unable to after Twitter restricted and suspended his account.

Rioters ended up breaching the Capitol building, and other protesters followed inside. Trump has since condemned the “heinous attack” by intruders on the Capitol, saying “the demonstrators who infiltrated the Capitol have defiled the seat of American democracy.”

The events on Jan. 6 have triggered an effort by big tech companies to ramp up its policing of content that they claim could lead to potential harm offline. Much of their enforcement actions have been directed towards President Donald Trump, his supporters, conservatives, as well as QAnon followers.

Meanwhile, Facebook, Apple, Google, and Amazon are among the companies that have taken actions to suspend their services for certain users, citing violations of company policies.