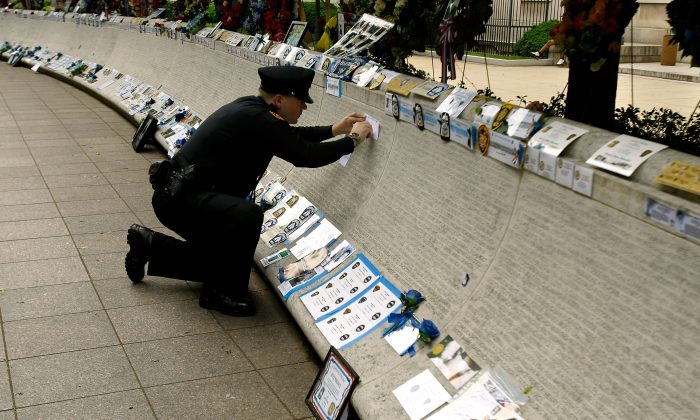 WASHINGTON - MAY 15: Memphis, Tennessee, Police Officer Nick Koonce makes a pencil rubbing from the memorial wall at the National Law Enforcement Officers Memorial May 15, 2009 in Washington, DC. Koonce made a rubbing of the name of Officer John Sykes, Jr., who was killed in the line of duty in 1982. Koonce did not know Sykes but said "It was his story I took to my heart every day when I was on the street." Thousands of law enforcement officers from around the country and around the world came to Washington for the 21st annual National Police Week, a convention organized by the National Law Enforcement Officers Memorial Fund. (Photo by Chip Somodevilla/Getty Images)
Opinion

As America prepares to commemorate National Police Week, we must pause to honor all who serve our communities, especially those who have offered the ultimate sacrifice.

President Kennedy also designated the calendar week in which May 15 falls as National Police Week.

During the same year, a joint resolution of Congress proclaimed National Police Week as the time to pay special recognition to those who died protecting others.

As of May 2, 2017, the fatalities of ethical protectors reflect a sobering 32 percent increase over the same time frame last year.

New York, California, Georgia, and Louisiana lead the nation with these fatalities.

Whenever an officer is killed in the line of duty, the NLEOMF informs the nation of their sacrifice through their Fallen Alerts Program.

This alert also initiates a process for the fallen officer’s name to be immortalized into the National Memorial.

The Memorial in Washington DC, honors federal, state, and local law enforcement officers who have made the ultimate sacrifice to protect and serve America.

Carved into the Memorial stones are the names of more than 20,000 officers killed in the line of duty.

These names date back to the first known death in 1791.

But unlike other iconic memorials in our nation’s capital, the National Law Enforcement Officers Memorial Wall (NLEOMW) is ever-changing.

As new officers offer the ultimate sacrifice, their names are etched into the Memorial each spring, in conjunction with National Police Week.

As one pauses to reflect on the sacrifices of our ethical protectors, we must remember they are members of America’s communities and families.

These are individuals with lives of hallowed service to America, who must be eternally remembered as individuals who represent the best of all of us.

This is a partial list of recently fallen ethical protectors as detailed on the NLEOMF site.

The inmate then stole the transport van and fled the scene. Afterwards, the inmate was found and taken into custody.

Deputy Sheriff Burbridge is the 14th law enforcement officer to be shot and killed in 2017 and the first officer fatality from the state of Iowa.

Corporal Stephen J. Ballard was shot and killed while investigating a suspicious vehicle at a gas station.

One of the suspects in the vehicle fired upon Corporal Ballard striking him multiple times.

Corporal Ballard was transported to the hospital where he succumbed to his injuries.

One suspect was apprehended at the scene and the second suspect barricaded himself inside his home.

Corporal Ballard is the 13th law enforcement officer to be shot and killed in 2017 and the second officer fatality from the state of Delaware.

Sergeant Megan Lee Callahan was killed after being assaulted at the Bertie Correctional Institution in North Carolina.

She was attacked by a male inmate serving a life sentence for a previous murder.

Agent Benjamin De los Santos-Barbosa was shot on April 16, 2017, when he and three other officers attempted to stop a vehicle with illegal window tint.

The suspect, who was on parole, led officers on a pursuit. The suspect then backed into the patrol car and opened fire as he exited the vehicle hitting Agent De los Santos-Barbosa in the head.

Agent De los Santos-Barbosa succumbed to his injuries on April 19, 2017.

Agent De los Santos-Barbosa is the 12th law enforcement officer to be shot and killed in 2017, and the first officer fatality from Puerto Rico.

America must appreciate the service of dedicated men and women protecting our communities in a dangerous profession deserving of honor.

As detailed in my article title “Fallen Officers Demand America’s Reawakening” for the July 20, 2016 edition of the Epoch Times, fatalities of our ethical protectors pierce the heart of America.

This senseless, unending anguish violates America’s security and rips the cohesiveness of police-community relations, critical to the preservation of society.

The alarming killings of police throughout the country is like one not experienced in decades. Law enforcement officials are being killed nationwide and the appalling reality is that things might get worse before they get better.

These tragedies are a sad commentary about the brokenness of American society since without collaboration between the police and the people, a society cannot endure.

America must build ethical bridges of respect, dignity, and decency within every facet of society, especially between the police and the people.

We will be on the path of reawakening the nation, when these bridges are built in our schools, campuses, workplaces, families, and communities.