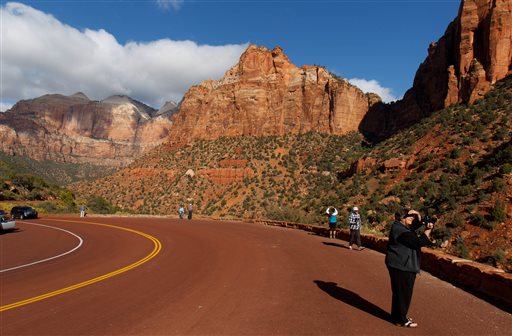 Visitors to Zion National Park take in the sights after the park opened on a limited basis Friday, Oct. 11, 2013 near Springdale, Utah. (AP Photo/The Salt Lake Tribune, Trent Nelson)
US

Visitors and shop owners were upbeat as all five national parks in Utah were open Saturday for the first time since the partial government shutdown began Oct. 1.

The main and overflow parking lots at Zion’s visitor center were filled to capacity by noon, and visitors faced at least a 15-minute wait to enter Arches.

“The crowd was not quite as good as a normal day, which for us is 10,000-plus per day at this time of year. But we were definitely busy. It’s great to be back,” Zion spokeswoman Alyssa Baltrus told The Associated Press.

In the small town of Springdale, adjacent to Zion, business was almost back to normal at the outdoor gear rental shop Zion Outfitters. It sold “absolutely nothing” while the park was closed, said manager James Milligan.

“It was like a ghost town over here the last week or so, but it was really busy today,” he said Saturday. “I’m super happy that the park opened. I have a family to support and wanted to know if I would have a job this week.”

A small group of protesters led by state Sen. Stephen Urqhart, R-St. George, staged a peaceful demonstration against the federal government Saturday by taking a short walk on a trail in Zion.

In Moab, Main Street business was humming again after nearby Arches and Canyonlands national parksreopened, The Salt Lake Tribune reported.

October is second only to May as far as business goes in Moab, said Arlo Tejada, marketing director of Sheri Griffith River Expeditions. Arches alone draws an average of 90,000 visits in October.

“A lot of businesses lost 30 percent last week and were expecting bigger losses this week,” Tejada told the Tribune. “When you have a bus with 40 or 50 people cancel, that’s a lot of rooms.”

At the entrance to Bryce, the lobby at Ruby’s Inn was empty Saturday only because “everybody was at thepark,” said an ecstatic Lance Syrett, general manager of the inn.

The inn received more than 400 new reservations over the past 24 hours as news spread that Utah’snational parks were reopening, the Tribune reported.

The response was “spectacular, more than we expected to get,” Syrett said. “There was definitely a different feeling among our guests, almost a festive-type feeling going on.”

The money from the state will allow the parks to stay open for 10 days, and local and state officials are hoping the federal government will resolve its budget dispute by then.

The Obama administration’s OK to reopen parks closed by the government shutdown came on the condition states must foot the bill with money they likely won’t see again. Utah is among only a handful of states that have agreed to reopen parks so far.

In northern Utah, two federally managed tourist attractions — the Bear River Migratory Bird Refuge in Brigham City and the Golden Spike National Historic Site in Promontory — did not make the list to be reopened.