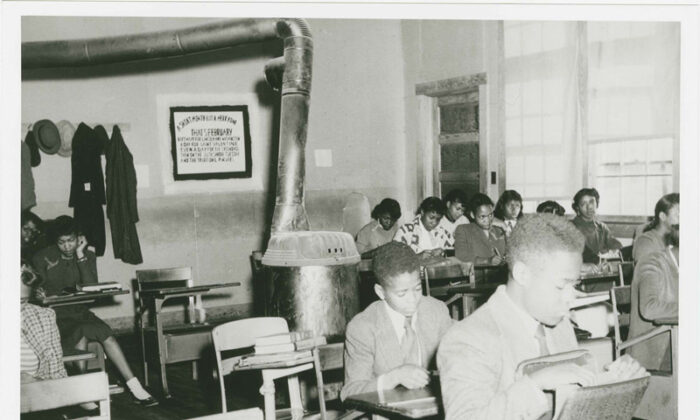 A 1951 photograph of Miss West's English 9 Class at R. R. Moton High School. It was used as Defendant's Exhibit No. 60, in the civil rights case Dorothy E. Davis et al. v. County School Board of Prince Edward County, Virginia, to show a comparison of conditions between black and white schools. This was one of five cases that were decided in Brown Vs. Board of Education. (National Archives)
Education & Family News

The Brown v. Board of Education National Historic Site in Topeka, Kansas, is expanding to sites in four other states and getting a new designation, according to an announcement on May 13 by the National Park Service (NPS).

Brown v. Board of Education was the 1954 landmark Supreme Court decision that ruled segregation of public schools is an unconstitutional violation of the 14th Amendment. The single name represents five cases that were heard as one, that had been filed in Delaware, the District of Columbia, Virginia, South Carolina, and Kansas.

The new designation at the Kansas site is signified with a slight name change to Brown v. Board of Education National Historical Park. National historical parks are commonly areas of greater physical extent and complexity than national historic sites, according to the NPS.

President Joe Biden signed the Brown v. Board of Education National Historical Park Expansion and Redesignation Act into law Friday, alongside Secretary of the Interior Deb Haaland. The act allows for the inclusion of additional related sites in the National Park System, pulling the sites of those five lawsuits from Brown v. Board into the system.

It adds two school sites in South Carolina to the historical park upon acquisition by NPS, and designates schools in Delaware, Virginia, and the District of Columbia as affiliated areas of the NPS.

The expansion of Brown v. Board of Education National Historical Park will more fully tell the story of the struggle to end school segregation, Haaland said in a statement.

The additions to the park are:

Scott’s Branch High School in Summerton, South Carolina. The so-called “equalization school” was constructed for black students in 1951 under the guise of providing facilities comparable to those for white students. Today, the former school is the Community Resource Center owned by Clarendon School District.

Now that the legislation is enacted, NPS will begin working with Clarendon County School District to discuss land acquisition through donation or other means, a spokesperson for NPS told The Epoch Times. There is no timeline for when the properties may ultimately be acquired. The process can take several years and is contingent upon property owners being willing to donate or sell the property and the NPS having donations or funding to complete the acquisition.

The newly authorized affiliated areas are:

Robert Russa Moton School, Farmville, Virginia. The all-black school was the location of a student-led strike in 1951 that lead to Davis v. County School Board of Prince Edward County. The former school is a National Historic Landmark, and today serves as the Robert Russa Moton Museum, which is administered by the Moton Museum Inc. and affiliated with Longwood University.

Howard High School, already a National Historic Landmark, was the first high school for African Americans in the state of Delaware and the school to which the plaintiffs in Belton v. Gebhart were forced to travel. Today, the school is known as Howard High School of Technology and is administered by the New Castle County Vocational-Technical School District.

Claymont High School denied admission to the plaintiffs in the Belton v. Gebhart case. Today, the former school is a community center.

Hockessin Colored School #107 was an all-black school one of the plaintiffs in Belton v. Gebhart was required to attend without public transportation. It is now used as a community facility.

John Philip Sousa Junior High School in Washington. Built in 1950 in the Fort Dupont neighborhood, this was an all-white school where 12 African American students were denied admission, spurring the Bolling v. Sharpe case. Today, the school serves as a public middle school and was previously designated as a National Historic Landmark.

Affiliated areas such as these recognize nationally significant properties that are usually owned and operated by nonfederal entities but can be eligible for technical and financial assistance from the NPS. Affiliated areas must meet the same standards for significance and suitability that apply to units of the National Park System. They also must be managed in accordance with the same standards and laws that apply to units in the National Park System.

“The Supreme Court’s finding that racially segregated schools were unconstitutional was unquestionably a pivotal event in our nation’s civil rights struggle and we are honored to serve as stewards to part of that history,” Haaland said.