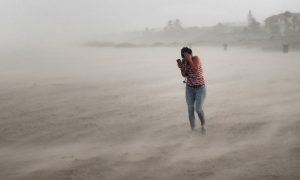 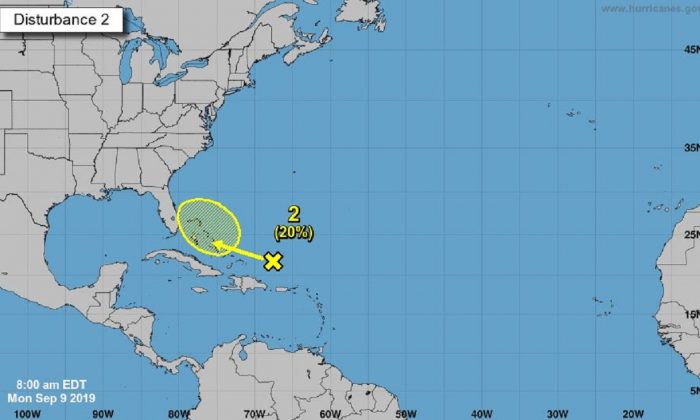 The National Hurricane Center is monitoring three weather systems in the Atlantic Ocean, including one approaching the United States.

A weather disturbance currently situated a few hundred miles north of the Greater Antilles is moving towards the Bahamas and Florida, a forecaster with the center said.

“Disorganized cloudiness and showers located a few hundred miles north and northeast of the Greater Antilles are associated with a surface trough interacting with an upper-level low. Little to no development of this system is expected during the next day or two while the system moves west-northwestward, north of the Greater Antilles,” according to a forecast on Sept. 9.

“Environmental conditions could become a little more conducive for development when the disturbance moves near the Bahamas and Florida late this week.”

Another disturbance is situated between the Cabo Verde Islands, off the coast of Africa, and the Windward Islands in the West Indies, the center said.

The “area of low pressure, associated with a tropical wave,” is producing disorganized showers and thunderstorms.

“Some slow development of this system is possible during the next two or three days before upper-level winds become unfavorable for tropical cyclone formation. This system is expected to move generally westward across the tropical Atlantic Ocean for the next several days,” according to the forecast.

Tropical Storm Gabrielle, meanwhile, was located away from the United States and didn’t appear to be moving toward the country.

Located east of the nation’s capital, the storm was tracking towards Europe. Its projected path would take it close to Ireland and the United Kingdom on Thursday, the center said.

The storm was moving north-northeast near 16 mph.

“Maximum sustained winds are near 60 mph with higher gusts. Little change in strength is expected today, but a weakening trend is likely to begin tonight. Gabrielle is expected to become an extratropical low by Tuesday night. Tropical-storm-force winds extend outward up to 80 miles from the center.”

Hurricane Dorian weakened further to an extratropical storm, the center said in its final advisory of the system early Monday.

Winds were down to 60 mph as the storm moved over the cold waters of the Labrador Sea.

The United States mostly avoided damage, though the storm did impact Florida, Georgia, North Carolina, and other states.

North Carolina authorities said over the weekend that Ocracoke, North Carolina, was a focus of emergency managers, doctors, and volunteer groups. About 100 National Guard soldiers remained on the island to support recovery operations. Insurance adjusters were planning to visit to help homeowners and businesses.

“Recovery efforts will continue so our coastal communities can recover as quickly as possible,” said Gov. Roy Cooper in a statement. “Not every area evacuated is safe to return to just yet. Those eager to return to the islands should follow the re-entry instructions issued by local governments.”