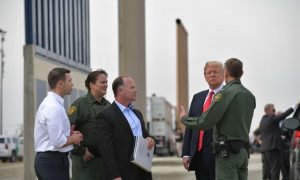 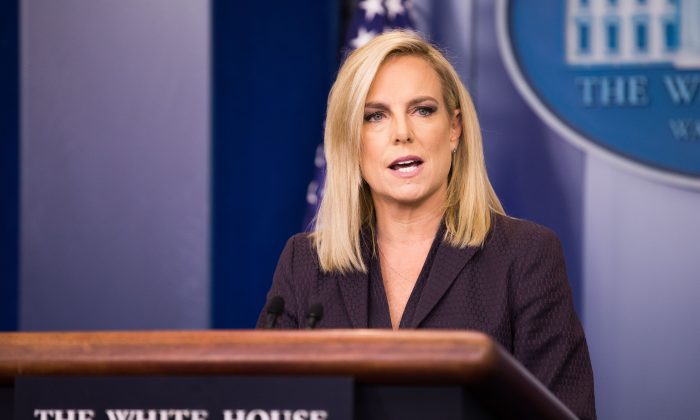 National Guard to Be Deployed to Southern Border Immediately

WASHINGTON—A day after President Donald Trump said he would use the military to help control the southwest border, the secretary of Homeland Security said the National Guard is being primed for deployment.

Speaking at the White House press briefing on April 4, Homeland Security Secretary Kirstjen Nielsen said she has spoken to four of the governors whose states share a border with Mexico and that they are ready to deploy the National Guard. Memorandums of Understanding are currently being drawn up with the governors.

Nielsen did not give the size of the deployment, nor the duration; saying she didn’t want to get ahead of the governors, but “it will be strong.”

“It will be as many as needed to fill the gaps today,” Nielsen said.

Former presidents George W. Bush and Barack Obama both used the National Guard for southwest border security during their presidencies.

“While plans are being finalized, it’s our expectation that the National Guard will deploy personnel in support of Customs and Border Protection’s border security mission,” Nielsen said. “It will take time to have the details in place, but we are beginning today and we are moving quickly. We are anxious to have this support.”

Nielsen said her department has outlined areas where it needs support, including aerial surveillance and on the ground support.

“We’ve been very specific state by state, locale by locale, of what CBP believes they need,” she said.

On a press call on April 4, a senior White House official said the possibility of deploying the National Guard has “been in discussion for a while.”

Although illegal border crossings hit historic lows during the first four months of 2017, they have since increased to previous levels.

A senior administration official said illegal border crossings have been rising for months and the numbers for March, which are to be released any day, “indicate a staggering increase from last year.”

“They clearly emphasize the need for additional action,” the official said.

Spring and summer are usually the busiest months for illegal border crossings, with May and June being the highest months.

“For individuals thinking about paying a smuggler to come up to the United States right now—that would be a very unwise investment,” the official said.