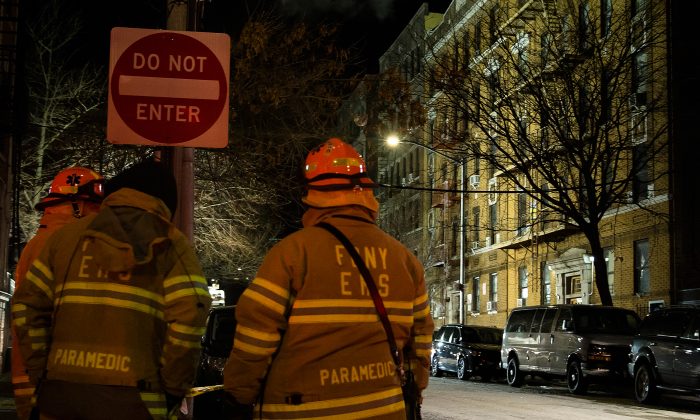 Twelve people died in the fire in the five-story Belmont apartment building on Dec. 28, 2017—one of them was 28-year-old Emmanuel Mensah, home on leave from the National Guard. (Amir Levy/Getty Images)
US News

A National Guard soldier home on leave after completing basic training gave his life to save others from the Bronx apartment-building inferno, which killed 12 people on Dec. 28.

For 28-year-old Emmanuel Mensah, his trip to visit relatives in New York for the holidays was his first time home in a year. Mensah had emigrated from Ghana about five years ago. He finally realized his dream of enlisting in the Army, joining the National Guard in 2016.

Another victim of the #Bronxfire, Emmanuel Mensah, a 28 yr old US Army solider, was home for the holidays. His father told @LSchmidtFox5 he died trying to help others get to safety @fox5ny 5pm pic.twitter.com/dkIL6ylTKF

Mensah earned the rank of private first class while graduating boot camp. He also earned a marksmanship medal, and because of his strength and maturity was considered a good candidate for the Military Police. After the holidays he was to decamp to Virginia, and then likely to some war zone overseas.

Instead, he gave his life on home soil, rushing into the burning Belmont building to rescue residents.

Mensah was staying with a friend’s family in the Belmont apartment building on Prospect Street in the Bronx when the deadliest fire to hit the Bronx in 27 years started in one of the apartments. The husband and wife got their four children safely to the street, while Mensah rushed back into the smoke to find others needing help.

The deadliest residential fire in a quarter century… at least 12 killed in the Bronx including a 1yr old baby.
Residents say fire escapes packed as people tried to get out. On the sidewalk emergency responders giving cpr to victims – some with their clothes burned off pic.twitter.com/fCLmfEe4iy

“He brought four people out,” said his uncle, Twum Bredu, told The New York Times. “When he went to bring a fifth person out, the fire caught up with him.”

“I understand when the fire was [going] he was trying to rescue … he had two or three people out,” Mensah’s father, Kwabena Mensah told the New York Post, crying from a mix of pain and pride. “He just came for the holidays.”

U.S. Army Soldier Emmanuel Mensah is still missing from the inferno that engulfed a Bronx apartment building overnight, killing 12, including four children. Prayers go out that this brave soldier is able to be found safely. pic.twitter.com/o1jUjYYSlx

“He helped his roommate’s wife and children, they were trying to come out to the stairs and he stopped them,” the elder Mensah told The Post. “He told them to come out the window. … Then he went in and tried to rescue people out.”

Mensah’s father told CBS2 News he wasn’t surprised to hear how his son died because “it was in his nature. He wanted to help people out.”

The fire started just before 7 p.m. when an unsupervised child turned on the stove in a first-floor apartment.

“When I wake up, all I see is the flames going up, kids are on the fire escape,” said Belmont resident Rafael Gonzalez. “It was one apartment and then it escalated to two apartments. It just kept going next and up—it escalated.”

About 170 firefighters eventually responded to the inferno. They got it under control in about three hours—but not before it claimed four children and eight adults, one of them being Emmanuel Mensah.