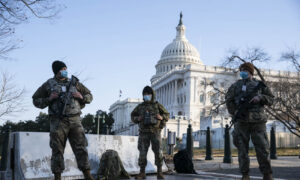 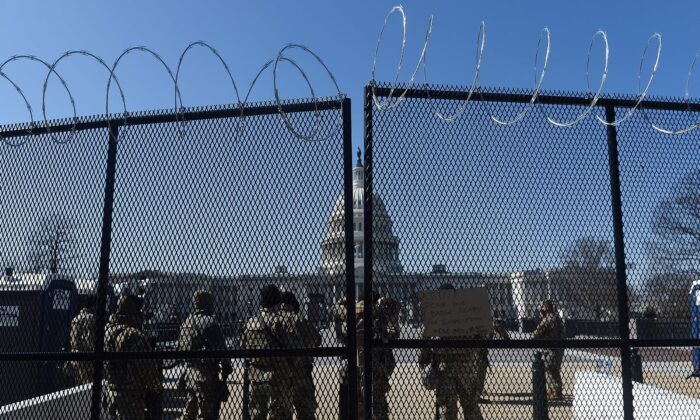 Members of the National Guard watch a checkpoint on Capitol Hill, Washington, on March 5, 2021. (Olivier Douliery/AFP via Getty Images)
US News

The National Guard has increased the number of routine inspections at a catering company responsible for feeding troops in the nation’s capital, following reports of metal shavings and uncooked meat in substandard meals.

Members of the National Guard became sick after eating the allegedly tainted food, Military.com reported. The meals were provided by Sardi’s Catering company, a family-owned business contracted by the D.C. National Guard to provide food for troops stationed at the Capitol.

The National Guard sends a representative to inspect the facilities where meals are prepared and packages by contractors, Maj. Matt Murphy told the Daily Caller News Foundation. The food is delivered by the contractor and distributed by the National Guard from the D.C. Armory, which is a little over a mile and a half from the Capitol building.

“After reports were made of ‘metal shaving’ found in at least one meal provided to Guard members, an inspection of the kitchen used to prepare contracted meals was conducted,” Murphy told the DCNF. “While no source was definitively determined, metal cleaning scourers used [by the contractor] to scrub pots and pans were identified as a possibility. All scourers were discarded on the spot and new, non-metal scourers are now being used.”

Rep. Greg Murphy (R-N.C.) sent a letter to the Secretary of the Army and the Chief of the National Guard Bureau citing reports of Guard troops finding metal shavings, raw meat, and worms in meals provided to them. National Guard officials said that they were working with the contractor to address the reported issues.

“The inedible food that has been served to our National Guardsmen as of late is totally unacceptable,” the North Carolina Republican said. “National Guard leadership has informed me that they will now have several soldiers at the caterer’s facility inspecting the food before it is delivered. It is expected that this move will improve the quality of the food being served to our men and women in uniform.”

A spokesperson for Sardi’s said it was proud to serve the military, but did not answer questions about whether the caterer delivered undercooked food to the National Guard, making at least 50 troops sick.

“As part of the quality control process, photos are taken daily of each meal and provided to the contracting officer. Temperatures are carefully regulated, and quality control is emphasized throughout Sardi’s Catering’s process,” a Sardi’s spokesperson told the DCNF. The spokesperson didn’t say how undercooked food was delivered to the guardsmen if temperatures were closely monitored.

Sardi’s delivers around 5,300 meals three times per day to the National Guard Armory, which are inspected by a National Guard official, the company said in a statement. The National Guard has estimated less than .01 percent of the 1.2 million meals delivered by Sardi’s were undercooked.

Sardi’s Catering said they greatly respect the National Guard and are “proud” to serve “nutritious and safe food” to the troops. The company is required to pre-package individual meals at their facilities to meet COVID-19 restrictions and said it couldn’t set up a kitchen that’s closer to the location of the troops.