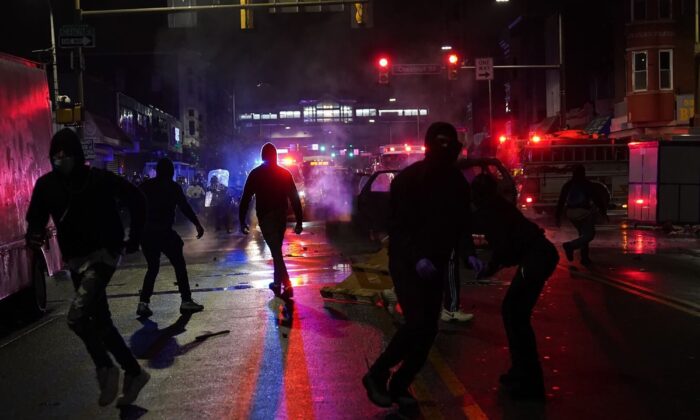 People gather in protest in response to the police shooting of Walter Wallace Jr. in Philadelphia, Penn., early on Oct. 27, 2020. (Jessica Griffin/The Philadelphia Inquirer via AP)
US News

National Guard Mobilized in Philadelphia After Night of Riots, Protests

The Pennsylvania National Guard was mobilized in Philadelphia in a bid to quell riots and unrest following overnight violence that left around 30 officers injured in the wake of an officer-involved shooting death of a black man who was allegedly armed with a knife.

Gov. Tom Wolf, a Democrat, has mobilized the National Guard to Philadelphia in response to the unrest that started on Monday evening, officials told the Philadelphia Inquirer.

Several hundred guardsmen are slated to be deployed within the next 24 to 48 hours, confirmed Lt. Col. Keith Hickox, a spokesperson for the Pennsylvania National Guard.

Hickox said the Guard will assist police in “protecting life, property, and the right to peacefully assemble and protest.” He said their role would be similar to the role played during the George Floyd protests and riots in Philadelphia earlier this year.

Pennsylvania National Guard “members are well-trained and well-prepared to assist the commonwealth and its communities in any way they can,” a spokesperson for Wolf told the paper.

“At the direction of Governor Wolf, and PEMA, the Pennsylvania National Guard is mobilizing several hundred members in support of the Philadelphia Office of Emergency Management and assist local agencies in protecting life, property and the right to peacefully assemble and protest,” Hickox said in a longer statement on Tuesday afternoon. “Assisting civil authorities during times of need is one of our core missions in the National Guard and our Citizen Soldiers and Airmen are well-trained and well-prepared to assist our commonwealth and our communities in any way we can. We are able to conduct operations in support of civil authorities to enhance local law enforcement’s ability to provide continued public safety and critical infrastructure security.”

“For today and this evening, we anticipate the chance of additional incidents of civil unrest and, as such, we will be taking additional steps to ensure order,” Outlaw said.

The White House also confirmed it would provide “federal resources” in Philadelphia if needed.

At least 30 officers were injured, including one who was hospitalized, and about 90 people were arrested during the night of unrest, Outlaw said.

The unrest was sparked by the shooting death of 27-year-old Walter Wallace Jr., who was brandishing a knife and wouldn’t put it down as he approached officers who had guns drawn, officials said.

Philadelphia District Attorney Larry Krasner, in a statement, said an investigation is underway.

“We intend to go where the facts and law lead us and to do so carefully, without rushing to judgment and without bias of any kind,” he said, adding, “In the hours and days following this shooting, we ask Philadelphians to come together to uphold people’s freedom to express themselves peacefully and to reject violence of any kind.”