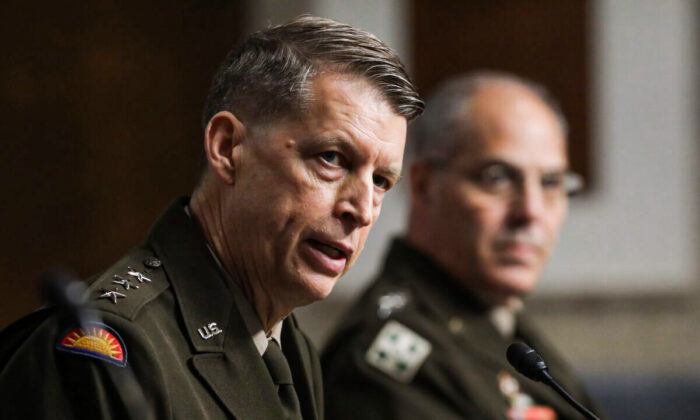 WASHINGTON—The chief of the National Guard has tested positive for COVID-19 after returning from an overseas trip to visit guard troops in Europe for Thanksgiving.

Gen. Dan Hokanson has been working remotely and isolating himself from contact with others all week, Guard spokesman Wayne Hall said Friday.

Other U.S. officials said Hokanson is fully vaccinated and tested negative while he was abroad, but tested positive when he returned to the United States. He left for Kosovo on Nov. 21, after making a brief refueling stop in Ireland, then traveled to Poland and Spain. He returned to Washington last Friday. Officials said he started having symptoms of a bad cold after he got the positive test result and that he was sick for about two days.

About 15 staffers traveled with him, and none have so far tested positive, according to the officials, who spoke on condition of anonymity to discuss personal health issues.

Officials said Hokanson has been working from home and led meetings with adjutants general around the country on Thursday.

Poland has a vaccination rate of 54 percent and reported more than 29,000 new infections earlier this week, the highest infection rate since a virus wave in the spring made central Europe a global hot spot for COVID-19.