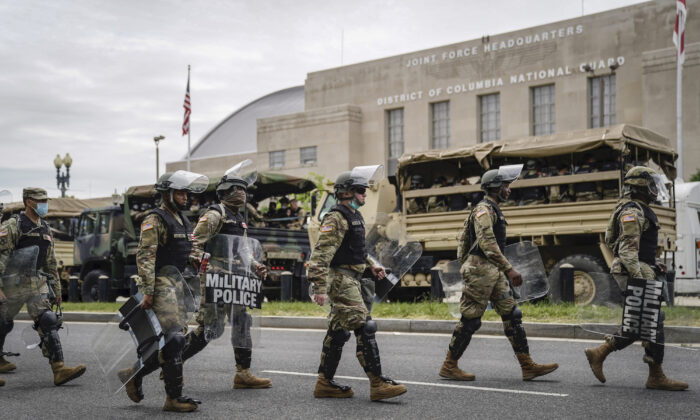 Troops load up into personnel carriers to take them toward the city from the Joint Force Headquarters of the D.C. National Guard in Washington on June 2, 2020. (Drew Angerer/Getty Images)
US Features

More than 20,400 National Guard soldiers and airmen have been called up in 28 states and the District of Columbia as of June 2 in response to riots in the wake of the death of George Floyd in Minneapolis.

The riots erupted out of peaceful protests, with far-left extremist groups fomenting much of the violence, looting and arson, video footage from localities across the nation suggests.

“The hardest mission we do is responding in times of civil unrest,” Air Force Gen. Joseph Lengyel, chief of the National Guard Bureau, said in a statement. “We are here to protect life and property, and preserve peace, order, and public safety.”

More than twice as many guardsmen have already been activated to address the pandemic, according to the National Guard.

President Donald Trump on June 1 urged governors to deploy the National Guard in their states. The National Guard had already been called up in 23 states on the day prior to the president’s call.

“Mayors and governors must establish an overwhelming law enforcement presence until the violence has been quelled,” Trump said in a statement in the Rose Garden at the White House on June 1.

“If a city or a state refuses to take the actions that are necessary to defend the life and property of their residents, then I will deploy the United States military and quickly solve the problem for them.”

The state of New York didn’t deploy the National Guard despite nights of widespread riots and looting. Gov. Andrew Cuomo blamed the inaction on New York City Mayor Bill de Blasio, who refused the assistance, according to Cuomo. At least two officers have been hit by cars in the city, while others were attacked by rioters and looters.

“We plan, train, and prepare for emergency response missions with our local, state, and federal partners,” Lengyel said in a statement. “We’re part of the communities we serve. We know the police, fire departments, and hospital workers. We know their capabilities because we live with their capabilities.”

The mayhem in New York drew attention from the president, who urged the city to call up the Guard, saying, “New York was lost to the looters, thugs, Radical Left, and all other forms of Lowlife & Scum.”

Cuomo laid some of the blame on the New York City Police Department and suggested he may have to displace de Blasio.

“First, the NYPD and the mayor did not do their job last night. I believe that,” Cuomo said at a daily press briefing. “Second, you have 38,000 NYPD people. It is the largest police department in the United States of America. Use 38,000 people and protect property. Use the police, protect property and people, look at the videos; it was a disgrace.”

At least five police officers have been wounded by gunfire during the riots, including one with a head injury in Las Vegas. Four officers who were shot and wounded in St. Louis were taken to a hospital with non-life-threatening injuries. An emotional St. Louis police commissioner, John Hayden, said about 200 protesters were looting and hurling fireworks and rocks at officers.

“They had officers with gas poured on them. What is going on? How can this be? Mr. Floyd was killed somewhere else, and they are tearing up cities all across the country,” Hayden told reporters.

In Atlanta, six police officers have been arrested for using excessive force. The officers were recorded breaking the windows of a vehicle before using a Taser on a man and yanking a woman out of the car.

The violent U.S. protests were triggered by the death of George Floyd, a 46-year-old African American who died after a policeman had his knee on Floyd’s neck for nearly nine minutes in Minneapolis on May 25.

Derek Chauvin, the 44-year-old Minneapolis police officer, was fired and has since been charged with third-degree murder and second-degree manslaughter. Three other officers involved, who also have been fired, haven’t been charged.

Dozens of cities are under curfews not seen since rioting that followed the 1968 assassination of Martin Luther King Jr. The White House will be establishing a “central command center” to oversee the federal response to the riots, press secretary Kayleigh McEnany announced on June 1.

The widespread nature of the riots has raised questions about whether the events have been coordinated. Dozens of video clips reveal a pattern of similar tactics employed by the violent extremists, many of whom appear to be affiliated with the Antifa extremist group.

“Is there anyone that truly believes that this was not an organized event? How much do you think it would cost for communications and travel and manpower for an event like this. Who’s money is behind it?” former NYPD Commissioner Bernard Kerik wrote on Twitter.

The NYPD told CBS News that some of the violence that took place in New York City was planned in advance by suspected Antifa members, according to evidence gathered during arrests. The agitators had a well-coordinated network of scouts, medics, as well as supply routes for rocks, bottles, and flammables.

Trump has condemned the killing of Floyd and taken a tough line on the violence, looting, and arson. The president said on May 31 that the United States will designate Antifa as a terrorist group.

“I want the organizers of this terror to be on notice that you will face severe criminal penalties and lengthy sentences in jail. This includes Antifa and others who are leading instigators of this violence,” Trump said.