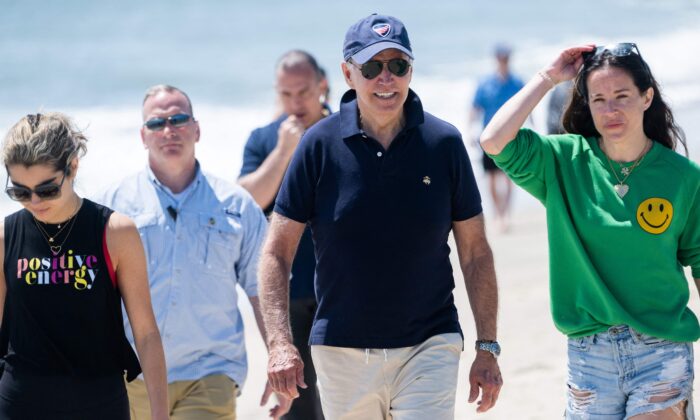 President Joe Biden walks on the beach with his daughter Ashley Biden (R) and members of his extended family in Rehoboth Beach, Del., on Aug. 25, 2022. (Saul Loeb/AFP via Getty Images)
Executive Branch

The cases brought against two Florida residents for their handling of property belonging to President Joe Biden’s daughter, Ashley Biden, prove that a document said to be her diary is legitimate, according to the publisher of the website that released the document.

Fritsch’s media outlet published the 112-page document in 2020, stating at the time that it received the diary from a media organization whistleblower.

National File later stated that an employee with Project Veritas provided the document after the nonprofit journalism group opted against publishing it.

Project Veritas has stated in court documents that it paid two people with the initials A.H. and R.K. for the document in 2020, but couldn’t verify its authenticity, so the nonprofit passed it on to law enforcement officials.

After FBI agents raided the homes of Project Veritas employees in 2021 as part of its investigation into what was described as the theft and illegal transport of the diary, Project Veritas stated that the raids “appear to be founded on the premise that the diary does belong to Ashley Biden.”

Harris and Kurlander each pleaded guilty last week to one count of conspiracy to commit interstate transportation of stolen property and face up to five years in prison. Attorneys representing them didn’t return emailed questions, and the plea deals haven’t been made public. Charging papers identified Joe Biden as a candidate for national political office and a former government official, while Ashley Biden was described as an immediate family member of the candidate.

“Harris and Kurlander stole personal property from an immediate family member of a candidate for national political office. They sold the property to an organization in New York for $40,000 and even returned to take more of the victim’s property when asked to do so,” U.S. Attorney Damian Williams, a Biden appointee, said in a statement. “Harris and Kurlander sought to profit from their theft of another person’s personal property, and they now stand convicted of a federal felony as a result.”

The defendants were each paid $20,000 by an organization based in New York for the diary and other materials, according to charging documents. Project Veritas has acknowledged paying for the property but stated that the sources attested to it not being stolen.

“Project Veritas’s news gathering was ethical and legal. A journalist’s lawful receipt of material later alleged to be stolen is routine, commonplace, and protected by the First Amendment,” a spokesman for Project Veritas told The Epoch Times in an email.

Fritsch said the media outlet was already confident that the diary was legitimate before deciding to publish it online.

National File didn’t pay for the document, according to Fritsch.

Multiple sources told National File that Project Veritas was prepared to publish the diary and even had a recording of Ashley Biden admitting that the diary was hers but that the nonprofit ultimately decided against publishing after pressure from people outside the group.

Project Veritas declined to comment. In a previous court filing, the group stated that there was “an internal belief that the diary was genuine” but that James O’Keefe, who founded and runs Project Veritas, and other employees “could not sufficiently satisfy themselves with the diary’s authenticity such that publishing a news story about it would meet ethical standards of journalism.”

The group also stated previously that it then tried to return the diary to Ashley Biden but that her lawyer declined to confirm whether the diary belonged to her. That’s when the group arranged for the delivery of the materials to a law enforcement agency in Florida.