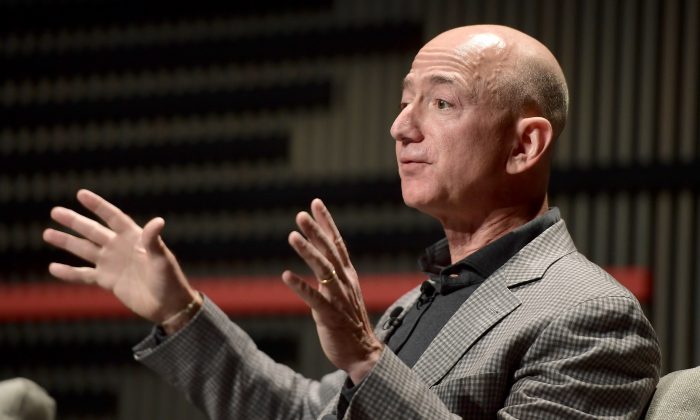 The world’s richest man, Jeff Bezos, accused the National Enquirer of extortion after the tabloid allegedly offered him a deal—salacious pictures of him won’t get published if he stops accusing the Enquirer of a political hit—which the magazine denies.

On Jan. 10, the Enquirer ran an exposé on Bezos’ alleged affair with former TV anchor Lauren Sanchez, wife of Patrick Whitesell, who is co-chief executive of the large Hollywood talent agency, WME. Before publication, the magazine confronted Bezos with its findings, prompting him to announce a divorce from his wife, MacKenzie Tuttle, a novelist.

Part of the exposé were messages sent between Bezos and Sanchez, including lewd selfies of Bezos, which the tabloid partially described, but “dare not print.”

De Becker’s suspicion then fell on Sanchez’s brother, Michael, who denied his involvement in revealing the alleged affair, according to The Washington Post.

Finding out that Michael Sanchez is a supporter of President Donald Trump and knew two people with minor roles on the 2016 Trump campaign, de Becker told The Daily Beast that “strong leads point to political motives” behind the Enquirer story.

American Media (AMI), which owns the Enquirer, denied the claim.

“American Media emphatically rejects any assertion that its reporting was instigated, dictated or influenced in any manner by external forces, political or otherwise,” AMI’s deputy general counsel Jon Fine wrote in an email to de Becker’s lawyer, Martin Singer, which Bezos shared.

De Becker’s assertion was also based on reports that AMI Chief Executive David Pecker is a friend of Trump and even agreed to buy and kill several embarrassing stories about Trump’s alleged past affairs.

Yet there appears to be no evidence that Trump had anything to do with the Enquirer’s report on Bezos, much less that the tabloid needed political motivation to exploit personal failings of a celebrity, the richest man on Earth no less.

On Feb. 6, Fine, AMI’s lawyer, offered De Becker’s lawyer a deal—Bezos’s lewd selfies won’t get published if “the Bezos Parties” affirm “that they have no knowledge or basis for suggesting that AM’s coverage was politically motivated or influenced by political forces” and agree “that they will cease referring to such a possibility,” according to Fine’s purported email released by Bezos.

The agreement also included “a full and complete mutual release of all claims that American Media, on the one hand, and Jeff Bezos and Gavin de Becker (the ‘Bezos Parties’), on the other, may have against each other.”

Bezos claimed this agreement was a form of extortion.

AMI released a statement on Feb. 8, saying it will look into the matter:

“American Media believes fervently that it acted lawfully in the reporting of the story of Mr. Bezos. Further, at the time of the recent allegations made by Mr. Bezos, it was in good faith negotiations to resolve all matters with him. Nonetheless, in light of the nature of the allegations published by Mr. Bezos, the Board has convened and determined that it should promptly and thoroughly investigate the claims. Upon completion of that investigation, the Board will take whatever appropriate action is necessary.”