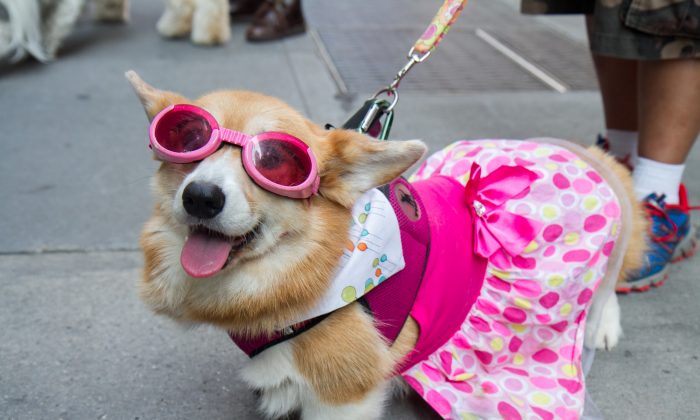 Dogs dressed up in lace and frills or in their birthday suits arrived for Tuesday’s dog party outside Loews Regency Hotel in Manhattan.

The three-hour gelato, martini, and doggy treat-filled event christened “Yappy Hour” marks National Dog Day and a way to gather dog owners around to show off their pets. Proceeds went to The Humane Society of New York, an animal hospital only three blocks down.

Two-year-old Chihuahua Holly Golightly stopped by with her mom in matching spotted dresses after a “Barkfest at Sniffany’s” photo shoot that paid homage to the Audrey Hepburn classic.

Holly is a stray originally from Texas, adopted from The Humane Society, with a mysterious past that causes her to be afraid of garbage trucks and children. She and her mom often wear matching outfits on Facebook and Instagram.

Eric Abello brought his Pembroke Welsh corgi, Hazel. The 6-year-old wore pink goggles and a frilly dress, hinting at her past as a show dog in New Jersey.

“We thought it was a big dress-up event at a fancy hotel,” explained Abello. “And I have a lot of dresses for her.”

He and his friends Mark and Cynthia Dolangin who brought their dog, Wally (Hazel’s boyfriend), all post photos of their dogs on Instagram.

“These animals bring such joy. I mean, here I am, sitting on 61st and Park Ave. and everybody’s attracted to a bunch of puppies,” said Anne-Marie Karash, associate director for The Humane Society of New York.

“There is shopping and wealth and there are so many wonderful material things to be had on Park Avenue, in New York City, but at the end of the day, this is the little treasure at home.”

Karash petted Bruce, a 10-year-old terrier mix, as she talked. She explained that Bruce, who is up for adoption, was shy and just getting acquainted to social environments after being abandoned as a puppy.

Dog psychologist Blake Rodriguez, who was invited by Loews, said, “I was super looking forward to it. I think anytime I have an opportunity to provide education in a field that I personally feel really, really needs it, I’m more than happy to do that.”

After providing dog owners with $5 consultations, Rodriguez joined the fun with his own dog, Soco, a 7-year-old German shepherd and husky mix.