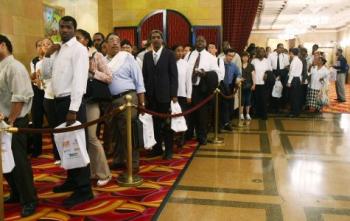 People wait in line to enter the Diversity Job Fair at the Affinia Hotel June 10, 2008 in New York City. The national unemployment rate rose to 5.5 percent in May, up from 5 percent in April. (Mario Tama/Getty Images)
US

By Evan Mantyk
Print
The U.S. national deficit is expected to hit a new high in 2009, topping $482 billion, according to the federal Office of Management and Budget (OMB) on Monday. The deficit is basically the amount that the federal government comes up short based on the amount of money it is spending versus the amount of tax revenue coming in.

The figure, which will likely be inherited by Republican John McCain or Democrat Barack Obama in the next presidency, soars over half a trillion if tens of billions in new Iraq war funding are considered.

The stimulus package that included tax rebates to millions of American also contributed to the rising deficit.

"Whoever becomes the next president will have a very, very sobering first week in office," said Senate Budget Committee Chairman Kent Conrad, D-N.D, according to the Associated Press.

The unbalanced budget is likely to leave a stain on President George Bush’s record as he leaves office at the beginning of next year. However, in their report, the OMB sought to soften the blow.

“At 2.7 percent of gross domestic product (GDP), the 2008 defi­cit is projected to be only slightly above the average of the past 40 years, 2.4 percent of GDP. Excluding the tax rebates and other provisions in the enacted bipartisan economic stimulus package, the 2008 deficit would be only 1.9 percent of GDP,” said a statement issued by the OMB.

The OMB points out that if the budget is handled according Bush’s plans it will be balanced by 2012, despite the war against terror waged by that administration.

“These projected deficits are both manageable and temporary if spending is kept in check, the tax burden remains low, and the economy continues to grow,” said an official statement by the OMB.