Dangerous and Dirty Water in China: Examples From the First Half of 2013
0
Share Now
TelegramFacebookTweetEmailTellMeWeReddit
Copy Link 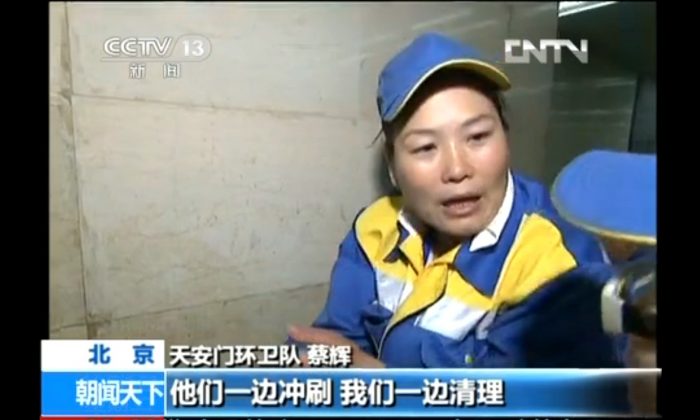 A cleaner is interviewed by China Central Television, about an article featuring trash strewn on the ground on Tiananmen Square, a phenomenon taken as an indication of the popularity of the event by Chinese state media. (Screenshot/CCTV/Epoch Times)
China

China’s state run media estimated that over 100,000 people turned out to observe the raising of the Five Star Red Flag on Oct. 1, the anniversary of the founding of the People’s Republic of China. And in a dubious demonstration of enthusiasm by the public, they were reported to have left fully five tons of garbage behind them.

China Central Television, the mouthpiece of the Chinese Communist Party, dedicated a whole news report to this fact. Interviews were held with cleaners of Tiananmen Square, boasting of their work removing the detritus of the masses: collecting bags of cigarette butts, scraping gum off the ground with chisels, and scrubbing the gutters with steel wool. Each worker used seven scourers each, the report said.

“After the flag raising this morning, there was so much trash left in Tiananmen Square that in the most dense parts, the ground did not even show,” CCTV said in a Weibo post celebrating the event and the efforts to cleanse it of garbage. “150 sanitation workers took to brooms, 2 street-sweeping trucks and 2 garbage trucks were deployed, and in a dragnet form they arrayed for battle, cleaning everything in 30 minutes.”

The report concluded in earnest: “According to preliminary calculations, the amount of trash collected exceeded 5 tons.”

An Internet user pointed out that this was not as good as 2005, when 19 tons of trash were left behind after the Golden Week holiday, which goes for seven days.