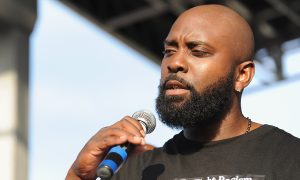 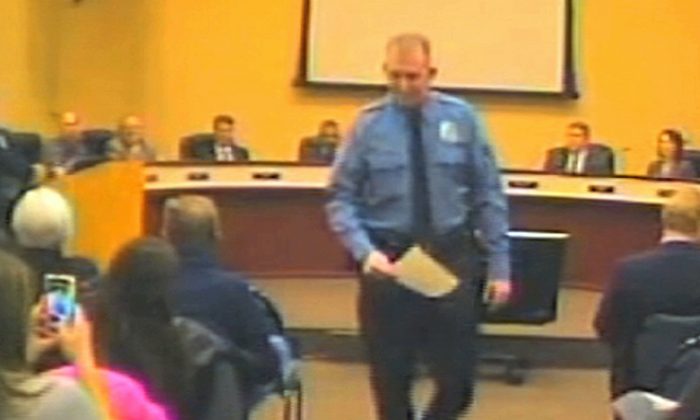 In this file Feb. 11, 2014 image from video released by the City of Ferguson, Mo., is officer Darren Wilson at a city council meeting in Ferguson. (AP Photo/City of Ferguson)
Ferguson

National Bar Association Calls for Darren Wilson to Be Indicted

Monday, November 24 saw one of the most controversial Grand Jury decisions in United States history. Thousands of protesters all over the country were enraged that Officer Darren Wilson would not be tried by jury for the shooting death of Michael Brown. St. Louis Prosecuting Attorney, Bob McCulloch, kept his word and released all of the evidence and testimony that was presented to the Grand Jury, after review, The National Bar Association responded with this statement:

President Meanes is requesting that the citizens of Ferguson, Missouri not allow this decision to cause an unnecessary uproar in the community that could lead to arrests, injuries or even deaths of innocent people. “I am asking for everyone to remain as calm as possible and to join in solidarity as we continue to support the family of Michael Brown and put our legal plan into full effect” says President Meanes  “I feel the  magnitude of the grand jury’s ruling as Ferguson, Missouri is only minutes from where I reside”, adds President Meanes.

Over the last couple of months, the National Bar Association has  hosted Town Hall meetings informing  attendees of their Fourth Amendment (Search & Seizure) constitutional rights, whether it is legal to record police activity, and how citizens should behave/respond if and when they interface with police officers. “The death of Michael Brown was the last straw and the catalyst for addressing issues of inequality and racial bias in policing, the justice system, and violence against members of minority communities,” states Pamela Meanes.

The family of Michael Brown requested that District Attorney McCullough step aside and allow a special prosecutor be assigned to the investigation to give the community confidence that the grand jury would conduct a complete and thorough investigation into the tragic shooting death of 18 year old Michael Brown. The grand jury’s decision confirms the fear that many expressed months ago — that a fair and impartial investigation would not happen.

“The National Bar Association is adamant about our desire for transformative justice. While we are disappointed with the grand jury’s ruling, we are promoting peace on every street corner around the world. The only way to foster systemic change is to organize, educate, and mobilize. We are imploring everyone to fight against the injustice in Ferguson, Missouri and throughout the United States by banding together and working within the confines of the law,” states President Meanes.