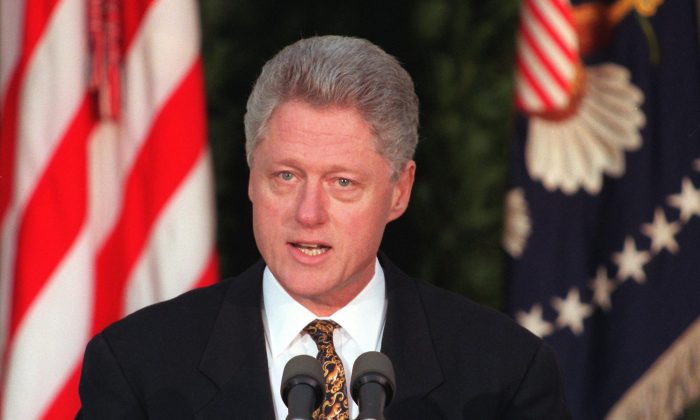 US President Bill Clinton addresses the nation from the Rose Garden of the White House in Washington on Dec. 11, 1998, to apologize for misleading the country about his relationship with White House intern Monica Lewinsky. (William Philpott/AFP/Getty Images)
Politics

WASHINGTON—The White House made a public push to defend President Bill Clinton during a series of investigations related to the Whitewater real estate deal to his affair with intern Monica Lewinsky, according to thousands of pages of documents released by the National Archives.

The documents, part of 10,000 pages of records from the Clinton administration released Friday, did not appear to reveal any new information that might affect a potential Hillary Rodham Clinton presidential campaign. But the papers focused on a number of painful chapters in the former first lady’s time in the White House and described how the president’s aides sought to defend her husband against impeachment.

Many records involving Lewinsky are redacted, but one document sheds light on her job: Lewinsky sent an official request to hang a picture of Clinton, signing a telecommunications bill, in a White House legislative affairs office.

Behind the scenes, Clinton officials were adamant that they were not trying to discredit Lewinsky.

“There is no evidence whatsoever that the White House was directing or involved in any campaign against her,” Clinton aide Sidney Blumenthal wrote in a January 1999 memo.

But the case caused political tensions. An aide notes in one document that then-Maryland Gov. Parris Glendening, a Democrat, explained “why he felt he needed to distance himself” from Clinton.

The papers touch on the 1993 death of deputy White House counsel Vincent Foster, the Whitewater investigation into Bill and Hillary Clinton’s land dealings in Arkansas, and pardons Bill Clinton granted in his final hours as president.

With these documents the National Archives will have released about 30,000 pages of papers since February. Both the Obama White House and the Clinton Presidential Library in Little Rock, Arkansas, signed off on their release.

The papers show that the Republican-led investigation into Foster’s suicide infuriated the White House, which tried to recruit bestselling author William Styron to write a piece critical of the probe. It is unclear if the piece was ever published.

As a White House counsel, Kagan defended Bill Clinton in the lawsuit brought by ex-Arkansas state employee Paula Jones. Clinton’s testimony for the Jones lawsuit, in which he denied a sexual relationship with Lewinsky, led to his impeachment in 1998. The House approved two articles of impeachment against Clinton, but he was acquitted by the Senate.

In a 1996 memo to then-White House counsel Jack Quinn, Kagan says, “I realize now that I may have really (messed) up” in not passing on word of a conversation in connection with an upcoming appearance related to the Jones case on the CNN show “Crossfire.” Kagan used another verb in the memo, one that’s more profane. “God, do I feel like an idiot,” she added.

Hillary Clinton’s influence in the White House is also explored, from her role in Clinton’s unsuccessful health care overhaul plan to her 2000 Senate campaign in New York. Bill Clinton left office in January 2001.

The memos offer only a narrow look at her Senate race — discussion among lawyers and staff over paying for political travel.

But some are devoted to one of the Clintons’ longest-running political roller coasters: the Whitewater real estate saga. As the case threatened to mushroom into a scandal, the president, first lady and their circle of advisers hatched a strategy to convince the public the Clintons had done nothing wrong — and had nothing to hide.

Some advocates, suggesting the Clintons step before the cameras to make their case, provided a point-by-point primer.

“In this situation, the Clintons’ attitude is their message. They must be relaxed, open and forthcoming. Any sense of bitterness, anger or righteous indignation will not work,” said a March 11, 1994, memo written by Clinton adviser Paul Begala. “No matter how justified some of our feelings on this may be, this will be the first time most Americans will hear directly from the president and first lady.”

“Discussion of plots, pain and personal injustice could strike some viewers as self-serving or just plain weird,” he continued. “The most important point to stress is that we have nothing to hide, we are fully complying with an independent investigation.”

The Clintons were never implicated in the Whitewater case, but their real estate partners, Jim and Susan McDougal, were convicted in a trial that also resulted in the conviction of then-Arkansas Gov. Jim Guy Tucker.

The documents touch on financier Marc Rich, who was indicted on fraud and other charges in 1983. He fled to Switzerland and was later pardoned on Clinton’s last day in office. Quinn, who had left the White House by then, suggests in a handwritten note that Israeli Prime Minister Ehud Barak discussed a pardon directly with Clinton.

Past installments of the documents have offered an unvarnished look at Clinton’s two terms, detailing his unsuccessful attempt to change the health care system, Republicans’ sweeping victories in the 1994 midterm elections and the shaping of his wife’s public image.

Hillary Clinton, who went on to serve as a senator from New York and as President Barack Obama’s secretary of state, now is a powerful advocate for Democrats in the midterm elections and the leading Democratic prospect for president in 2016.

The possibility of a presidential campaign has heightened interest in the documents by media organizations, political opposition researchers and historians.