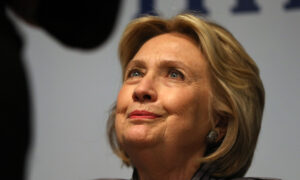 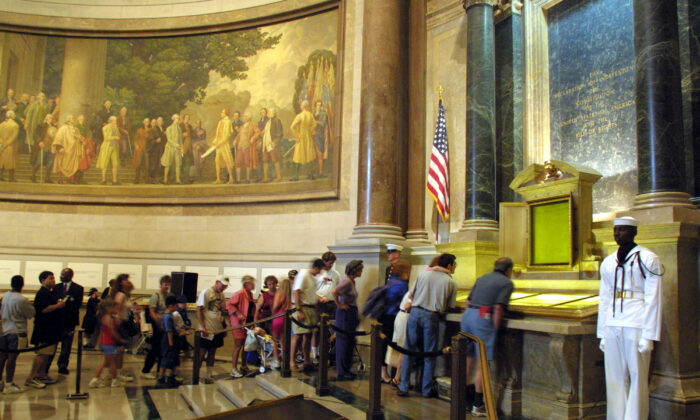 Visitors wait in line to view the original copies of the Declaration of Independence, the Constitution and the Bill of Rights at the National Archives in Washington, D.C. (Alex Wong/Getty Images)
Censorship & Socialism

A report by National Archives finds that the federal agency’s iconic Rotunda, where founding documents of the United States are on prominent display, is a symbol of “structural racism,” suggesting that the chamber should place “trigger warnings” to protect visitors from its contents.

The report (pdf) was released by the National Archives’ Task Force on Racism on April 20, but only recently gained media attention. The task force, established by Obama-appointed National Archivist David Ferriero in the aftermath of the death of George Floyd and the ensuing nationwide unrest, concludes that an “overarching system of racial bias” is “unequivocally” affecting how the agency operates.

The report cites the Rotunda, which has been home to original copies of the Declaration of Independence, U.S. Constitution, and the Bill of Rights since 1952, as a leading example of the alleged “structural racism” within the National Archives. It describes the exhibition hall as a part of the headquarter building that “lauds wealthy white men in the nation’s founding while marginalizing BIPOC (Black, Indigenous, and People of Color), women, and other communities.”

The task force specifically takes issue with the Rotunda’s famed murals depicting historical moments such as the signing of the Declaration of Independence and Constitution, saying that “women, American Indians, and enslaved people” are left out of those depictions of the American founding.

“While these massive paintings are historically significant and loved by many, others find them oppressive and exclusionary,” the report argues, adding that the Nation Archive should “reimagine” the Rotunda by commissioning a “diverse group of contemporary artists” to create new murals “reflecting a variety of interpretations of the founding documents.”

In addition, the report recommends the placement of “trigger warnings” alongside certain displays, so that visitors could be forewarned of “content that may cause intense physiological and psychological symptoms.”

“A verbal or written notice that precedes potentially sensitive content,” the report reads. “Such notices flag the contents of the material that follows, so readers, listeners, or viewers can prepare themselves to adequately engage or, if necessary, disengage for their own well-being.”

When it comes to the creators of the founding documents, the task force says the Archives’ websites have shed too much of a positive and celebratory light on Founding Fathers like Thomas Jefferson, the drafter of the Declaration of Independence and the third president of the United States.

According to the report, the website OurDocuments.gov “often uses adulatory and excessive language to document the historical contributions of White, wealthy men.” For example, Jefferson is described as a “visionary” who acted to realize the “will of the nation to expand westward,” without explaining how the westward expansion “forced Native Americans off their ancestral land, encouraged ongoing colonial violence, and laid the groundwork for further atrocities like the Trail of Tears.”

Johnathan Turley, a constitutional law professor at George Washington University, said while he agrees with the effort to contextualize historical records, the Rotunda has a “defined and confined purpose” that does not need reimagination.

“The Rotunda is a celebration of these foundational documents, not some zero sum contest for what groups will now be represented in this relatively small space,” Turley wrote in a blog post. “The Rotunda is designed as a reverent space for our founding documents. It does not require reimagination to understand the power and significance of those documents.”