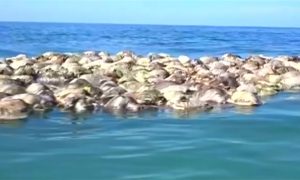 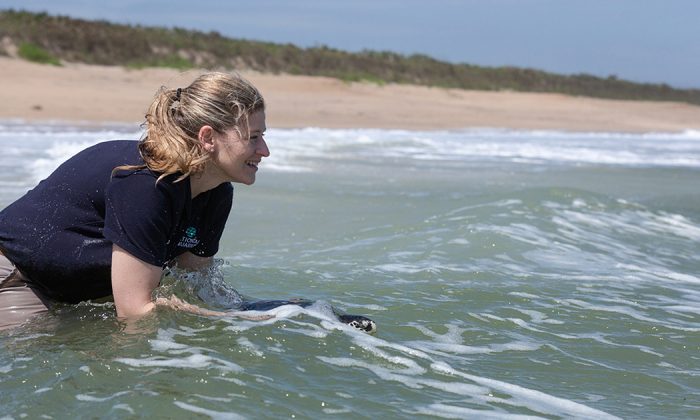 National Aquarium Releases Rescued Sea Turtles Back to the Ocean

Kemp’s ridley sea turtles that have been rehabilitated through an animal rescue program were released back into the ocean on March 20.

The National Aquarium confirmed it has released the rehabilitated sea turtles back into the Atlantic Ocean at Canaveral National Seashore, 34 miles east of Orlando, Fla.

“National Aquarium Animal Rescue returned 11 of our rescue turtle patients to their ocean home earlier this week,” the aquarium said in a Facebook post dated March 23. “This release also marks an exciting milestone for Animal Rescue—more than 250 animals have now been rehabilitated and released since the program’s founding in 1991.”

At the same time, staff also released a further 25 sea turtles, which the New England Aquarium, National Marine Life Center, Pittsburgh Zoo & PPG Aquarium, Virginia Aquarium, and the Riverhead Foundation for Marine Research and Preservation, had separately rehabilitated raising the total number of sea turtles released back into the wild to 36.

The National Aquarium said the turtles were rescued after showing symptoms of being cold-stunned, a hypothermic reaction to prolonged exposure to cold water temperatures.

“Many of them were treated for ailments associated with hypothermia—including pneumonia, upper respiratory infections, eye lesions, and frostbite on their flippers,” an aquarium spokesperson said in an official blog post dated March 23. “Most of the turtles released had cold-stunned along the Massachusetts coast late last year.”

The National Aquarium released 11 sea turtles it was rehabilitating into the Atlantic Ocean. https://t.co/U1O6vs6Jfi

During their stay at the animal rescue program, the sea turtles were named after elements of the periodic table.

“Some of the patients released this week include Neon, Titanium, Nitrogen, and Boron,” the spokesperson said.

Aquarium staff will rehabilitate a further 15 rescue turtle patients—11 Kemp’s ridley, two loggerheads and two green sea turtles—until they are ready to be released in the wild and allowed to return to their ocean home.

A video of the sea turtles swimming off into the ocean has gone viral, with many people commenting on the spectacular scene.

“I’ll bet they are thinking: ‘Gee! I didn’t know I could fly! This is fun!'” Barbara Cornell said.

One person was anxiously waiting for more sea turtles to be released from an animal hospital at the Florida Keys.

“Great news! I think some of the others are down at The Turtle Hospital in Marathon and we see them online from time to time,” Kathy Jones said.

Others thanked the aquarium staff for their tireless efforts.

“Thank you for what you do and for sharing the release,” Kathryn Peck Balch said.

“Katharine Peck I know, right?! It’s really fun to work at the National Aquarium! By the way, you have a great name!!! LOL,” aquarium Professional Photographer Katharine Peck said.

Sea turtles are excreting plastics, which could signal tremendous negative implications for the ocean’s food web. Read more about our recent study with @LoggerheadMC in the latest issue of Research Magazine. @UGAResearch https://t.co/3T5XHXRNK0

“Sea turtles play an incredibly important role in all of our oceans” – #BluePlanetLive. Did you know one Green Sea Turtle can eat 2kg of seagrass a day? Help us keep it on the menu in the Maldives and #ProtectMaldivesSeagrass https://t.co/ZTxoN2w2YJ @BBCEarth pic.twitter.com/OZIi2e3rph