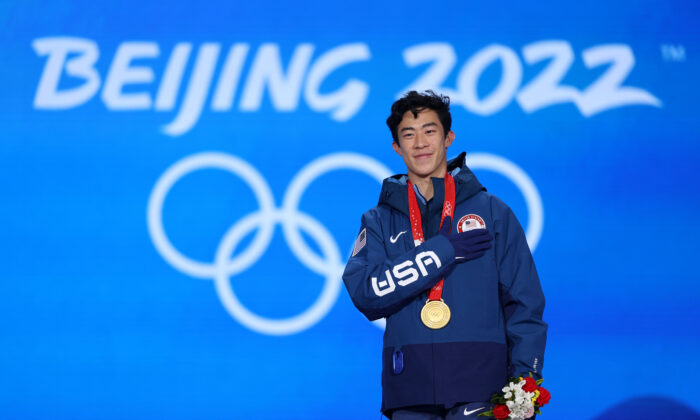 Nathan Chen completed his four-year journey toward an elusive Olympic gold medal Thursday, following his record short program at the Beijing Games with a near-perfect free skate that earned him a standing ovation from supporters inside the Capital Indoor Stadium.

The 22-year-old star landed all five of his quads during his “Rocketman” program to finish with 332.60 points—just three off his own world record—and become the first American champion since Evan Lysacek stood on the top of the podium in 2010 in Vancouver.

Chen’s score easily outdistanced his two closest pursuers, Yuma Kagiyama and Shoma Uno of Japan, and put firmly in the past any lingering memories of his brutal disappointment four years ago in Pyeongchang.

In Pyeongchang, Chen was taken out of medal contention after delivering what he called a “disastrous” short program. Afterward, he worked relentlessly with coach Rafael Arutyunyan to strengthen every aspect of his figure skating. His path back to the Olympics included three straight world titles and his sixth national championship.

Then earlier this week, Chen vindicated his disappointing performance from four years ago with a record-shattering short skate that put him nearly 6 points ahead of his next closest challenger.

Long-time rival Yuzuru Hanyu, the two-time defending Olympic champion from Japan, came into the free skate with a deficit so great that not even his planned quad axel in the free skate—which he missed—would’ve made up for it. He finished in 4th place after falling in his attempt to become the first figure skater to land the quad axel in competition.

American Vincent Zhou, who competed with Chen in the team event, withdrew after testing positive for COVID-19.