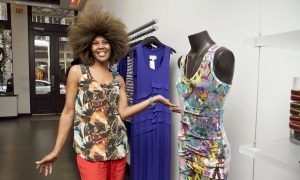 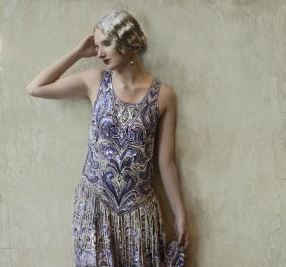 In today’s era of fast fashion, it is rare to come across a designer who creates clothing by hand with meticulous care and rapt attention to detail, and whose styles accurately capture a time gone by.

We found such a designer in the talented Natasha von Rosenschilde, who creates a level of couture that can only be described as works of art.

In an interview over the phone and via email, Miss von Rosenschilde said that she finds tranquility in sitting and embroidering, and that inner richness gets translated into the garment.

There is a peace that “descends upon the spirit when we create something truly beautiful,” she said. It becomes “a work that is a collaboration of many hands, love, and the result is simply Beauty.”

Perhaps what also lends a magical element to her designs is their inspiration—the richness of the costumes at the Ballets Russes and its founder, Sergei Diaghilev, as well as more ethereal realms.

“I wanted to create timeless pieces,” she told The Epoch Times.

“I am more influenced by visionary art, spiritual fantasies, goddesses, and angels, but imagine these visions with a Deco feel to them. Love, elegance, grace, refinement of another time, but made modern.”

Also an artist, sculptor, and photographer, Miss von Rosenschilde developed her love of embroidery from childhood. She was influenced by European traditions, as well as by the fine needlework from her mother and grandmother.

She incorporates each of these honed skills in her work.

“I draw every line of stitching,” she described. “And make the patterns to draw the designs on first. The drawings can take up to a month to perfect, depending on the design.”

“They are then pierced and hand-punched with a needle, and the design transferred to frames of stretched fabric where several fine craftsmen will sit and embroider the designs with the beads for days to weeks at a time. The pieces are then hand finished and stitched.”

It is no wonder that she calls each piece “a special fantasy.” Each can be made and designed to order. Miss von Rosenschilde, who also designs made-to-order hats, said it really is about “creating something special for someone special, when one has the opportunity to do that.”

“They are art works,” she said. “One feels a magical weight, as if a cloak of power sometimes. The beads warm up as they hug the skin. Their weight caresses the body.”

Currently she makes gowns with antique lace and hand-embroidered details such as ribbons, flowers, and beads. These have a soft, flowing style that has a modern romantic quality but with a 1920s feel as well.

It is as though Miss von Rosenschilde flows with each creation and imbues it with her vision.

It is becoming harder for Miss von Rosenschilde to find fine craftsmen to execute her designs. She says that creating garments lovingly decorated by hand is an ancient art that is disappearing in this fast world.

Not so for Miss von Rosenschilde, though, who still prefers to take life one magical stitch at a time.

It took six months to create the dress with four craftsmen stitching it entirely by hand and working off her original drawing and pattern.

The embroidery work was designed “as if it were a painting,” she said. “Magical hues of purple and blue accent the arabesques and fine lines that curve around the heavy bodice and outline the petals of the skirt.”

She said that she wanted to revive the spirit of the ’20s, with “light shimmering, a joyous sparkle.”

“Every era has its spirit. That time was perhaps a joyous revolution, a liberation, stepping into newfound freedom—a new era, century. The world was changing so fast—like now,” she said.

The Roaring Twenties was a decade overshadowed by the Great Depression, mired between two world wars, yet romanticized in literature and the arts.

Now this period is being revived in the soon-to-be-released movie “The Great Gatsby,” in the popular HBO series “Boardwalk Empire,” and in the clothing that floated across runways in 2011—think Marc Jacobs, Ralph Lauren, Tory Burch, and Oscar de la Renta.

Twenties fashion came and went with a flurry of beads, fringes, drop-waists, short bobs, and—we dare not forget—the flappers. Women learned to exert themselves in society, perhaps in unknown preparation for their service during World War II. There was still an innocence in America, but it was quickly vanishing.

The clothing attests to the glitter-laden era, a bright and dazzling spark that extinguished with the Stock Market Crash of 1929.