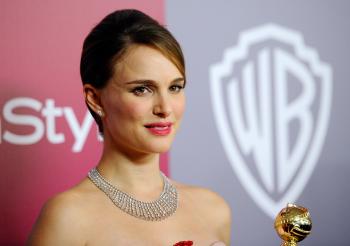 Natalie Portman, winner of the Best Performance By An Actress in a Motion Picture (Drama) award for 'Black Swan'arrives at the 2011 InStyle And Warner Bros. (Kevork Djansezian/Getty Images)
Entertainment

By Alex Johnston
Print
Natalie Portman, for her role in Black Swan, received an Academy Award nomination on Tuesday for Best Supporting Actress.

The 29-year-old actress said that she is "so honored and grateful" to the Academy of Motion Pictures Arts & Sciences for giving her the award, according to Us Magazine.

"It is a wonderful culmination of the ten-year journey with Darren to make this film," she told the magazine. Darren Aronofsky directed the movie. "Making Black Swan is already the most meaningful experience of my career, and the passion shown for the film has completed the process of communication between artists and audience."

However, Portman will face stiff competition from Annette Bening, who is nominated for her role in The Kids Are Alright. Bening, 52, already won a Golden Globe for her role in the indie-comedy film.

Black Swan is also nominated for Best Picture and Aronofsky received a Best Director nod for directing the film.

Colin Firth has already generated a tremendous amount of Oscar buzz for his portrayal of speech-impaired King George VI in The King's Speech, and also received his Oscar nomination.

“It seems like I was fired out of a cannon this time last year," Firth said on the Today show. "And now it’s like I’m orbiting Pluto. It’s quite extraordinary.”