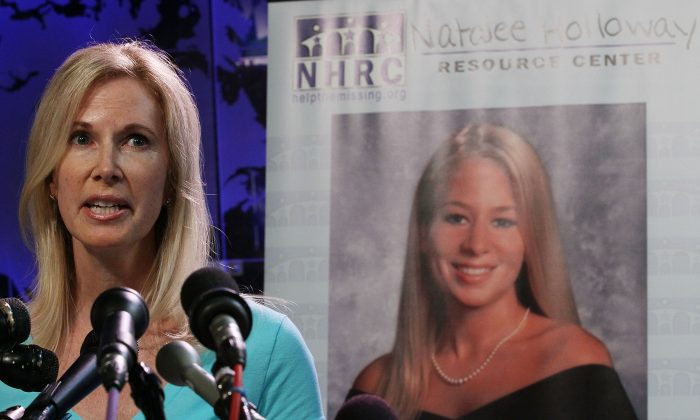 Beth Holloway participates in the launch of the Natalee Holloway Resource Center on June 8, 2010 in Washington, D.C. (Mark Wilson/Getty Images)
US

Natalee Holloway’s remains were mixed with dog’s bones to hide the evidence, then cremated, according to a mini series documenting the teenager’s death.

Grisly details about Holloway’s disappearance emerged in the third episode of the Oxygen series “The Disappearance of Natalee Holloway.”

The series follows Natalee’s father Dave and his private investigator TJ Ward, 12 years after the Alabama teenager went missing. The 18-year-old vanished in 2005 on a graduation trip to Aruba in the Carribean.

The prime suspect has long been Joran van der Sloot, whose best friend, John Ludwick, was secretly recorded saying, “I can take you to where I… I got the remains,” according to the series.

Ludwick then claims that he was paid to cremate the remains and scatter the ashes in the recording caught by an informant called Gabriel.

Ludwick says he has no remorse. “It didn’t happen to my kid,” he said. “Could have thrown it in the ocean, could have flushed it down the toilet. I don’t give a [expletive]”

The informant said that Ludwick claims that Van der Sloot, who is serving a 28-year prison sentence in Peru for an unrelated murder, gave her the date rape drug GHB and she choked on her own vomit.

Natalee’s father, Dave Holloway, and his private investigator, TJ Ward, continue on their quest to try and search for Natalie’s remains and prosecute those responsible. Authorities in Arubia officially closed the case in 2008.