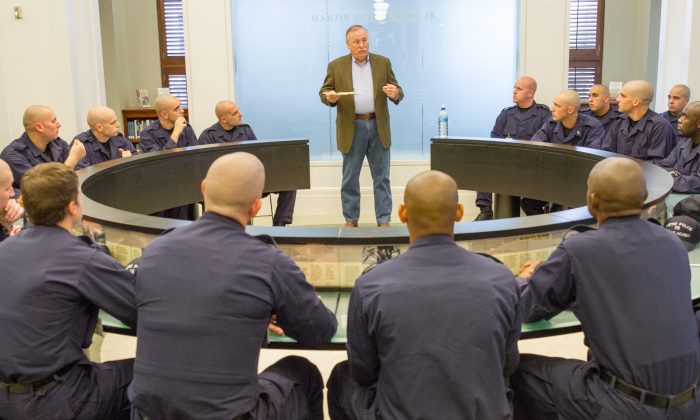 In this Oct. 1, 2015, photo, Nashville Police Chief Steve Anderson addresses the recruits police recruits during a program at the downtown library on the history of civil rights in Nashville, Tenn. (AP Photo/Erik Schelzig)
US

NASHVILLE, Tenn.—On the same downtown block where Nashville police officers carried a young John Lewis by his hands and feet to a paddy wagon for daring to take a seat at a whites-only lunch counter decades ago, today’s fresh-faced police recruits are learning lessons about the fraught history between law enforcement and black Americans.

About 60 police hopefuls, many around the same age Lewis was when he emerged as a leader of the civil rights movement, gathered recently in the “Civil Rights Room” at Nashville’s main library. Dressed in plain blue uniforms, they listened to stories about Lewis and other college students who helped make Nashville the first Southern city to desegregate its lunch counters. Words Lewis uttered back then to urge his fellow students not to falter in the face of violence — “If not us, then who? If not now, then when?” — were inscribed on the wall above the recruits.

As confrontations between police and the black community once again trigger public outcry, law enforcement leaders around the country are looking for new ways to restore trust. In Tennessee, they have turned to the Nashville library’s rich archive on the movement to teach new recruits about past injustices, hoping the lessons of history will foster even-handed police work. The sessions with new recruits quickly became a core part of their training, and other law enforcement agencies around the country have taken notice.

“This interaction is going to put in the minds of everybody in that room, ‘When I approach someone or someone approaches me, I need to think about where they may be coming from,'” said Nashville police Chief Steve Anderson after speaking to recruits at a recent session.

For several years, the library’s Civil Rights Room, lined with pictures of Nashville during the movement, has become the setting for regular programs about the role leaders like Lewis, Diane Nash, Bernard Lafayette and James Lawson played in the push for equal treatment.

Some Nashville officers who visited the room while on a leadership tour were so impressed that they asked the library to develop a curriculum for new recruits, and later for veteran law enforcement officers, including members of the Tennessee Bureau of Investigation.

“Civil rights education is a valuable part of the training we pursue for our agents,” TBI Director Mark Gwyn said. “Remembering the valuable lessons learned from the mistakes of the past helps us to better serve the diverse public we encounter in our work every day.”

At the library’s first session with new recruits in April, instructors used images, films and oral histories to connect the past to situations they might face now.

“As long as civil rights aren’t realized, then everyone is going to feel the burden and the pain from that,” he said.

Andrea Blackman, who oversees the library’s program, said police chiefs from across the country have visited the library to learn about the program, and some have asked her to put something together for their departments.

“Today’s young officers weren’t even alive back then, but this history is alive in people’s memories and can’t be swept under the rug,” he said. “By incorporating these lessons into the curriculum for police recruits, the Nashville Police Department distinguishes itself as a leader.”

That view is shared by some of the legendary civil rights leaders the young recruits are learning about.

Bernard Lafayette recalled how during the lunch counter sit-ins, Nashville police would just stand by as he and other protesters were attacked. He said he hopes programs like the one at the library will help new recruits better understand their roles as protectors, and the trust bestowed on them.

“You do more than simply stop the shootings, you create a sense of community,” said Lafayette, who still teaches Dr. Martin Luther King Jr.’s principles of nonviolence all over the world. “Because in my opinion, there is no separation between police and community.”

Lawson, who started training students in nonviolent protest in a church basement before the sit-ins began more than a half-century ago, said he believes such a program helps officers “adopt the notion that I’m going to treat this person exactly as I want to be treated.”

“I’m not going to say that police officers can do that in every situation … where life is being threatened or crime is being committed,” he said. “But I do say that in the 80 or 90 percent of the encounters that they have as police officers, which usually have nothing to do with a crime being committed, they can treat the folk that they’re facing and dealing with and incidents with that kind of character and spirit.”