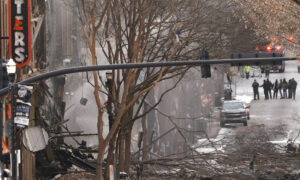 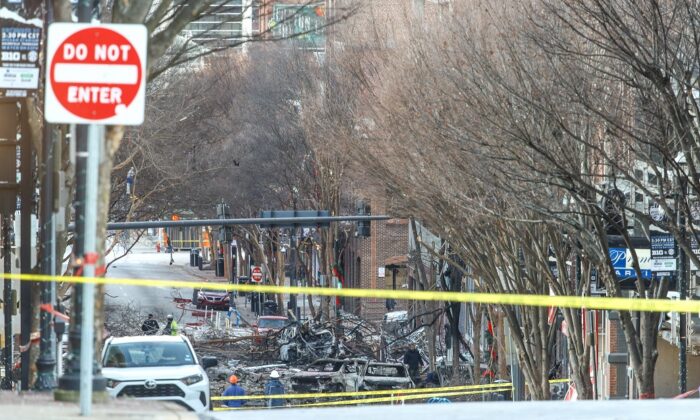 Police close off an area damaged by an explosion on Christmas morning in Nashville, Tenn. on Dec. 25, 2020. (Terry Wyatt/Getty Images)
US News

Drake told The Tennessean that Warner was linked to the blast near the AT&T building downtown. A spokesman for the Metropolitan Nashville Police Department told Reuters that Warner is under investigation in the case.

According to the news outlet, citing public records, Warner held several IT jobs over the years. He also had extensive experience with alarms and electronics systems. Recently, he worked for real estate company Fridrich & Clark.

Before the explosion, police said that the speakers on the RV that later exploded played the song “Downtown” by Petula Clark.

Steve Schmoldt, a neighbor of Warner, told the Tennessean that he lived next to the man for two decades, saying Warner was “kind of low key to the point of, I don’t know, I guess some people would say he’s a little odd.” Warner was furthermore described as friendly and made small talk.

“You never saw anyone come and go,” Schmoldt said of his home. “Never saw him go anywhere. As far as we knew, he was kind of a computer geek that worked at home.”

Lights and security cameras were placed outside his home, the neighbor added. Warner never spoke to him about religion, politics, or ideologies.

“I can tell you as far as politics, he never had any yard signs or flags in his window or anything like that. If he did have any political beliefs he kept, that was something he kept to himself,” Schmoldt said.

The RV that was apparently used in the explosion was parked outside Warner’s home for years, Schmoldt said, adding: “We didn’t really pay any attention it was gone until the FBI and ATF showed up.”

Officials said that the person who detonated the explosive in the RV appeared to have tried to avoid casualties.

Public records said Warner had owned his own alarm and electronics company, and it produced burglar alarms.

And Steve Fridrich, the owner of the company where Warner most recently had worked, said that he provided computer services to the firm. In December, Warner emailed to inform them he wouldn’t be working for them, according to Fridrich.

“He seemed very personable to us–this is quite out of character I think,” Fridrich said, according to Reuters.

Darrell DeBusk, a public affairs officer for the FBI, confirmed that human remains were found at the blast site.

“It depends on the lab and the evidence,” DeBusk told The Tennessean about the remains. “This case is receiving priority.”