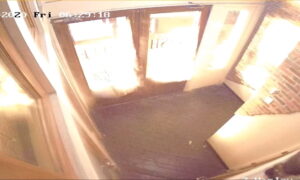 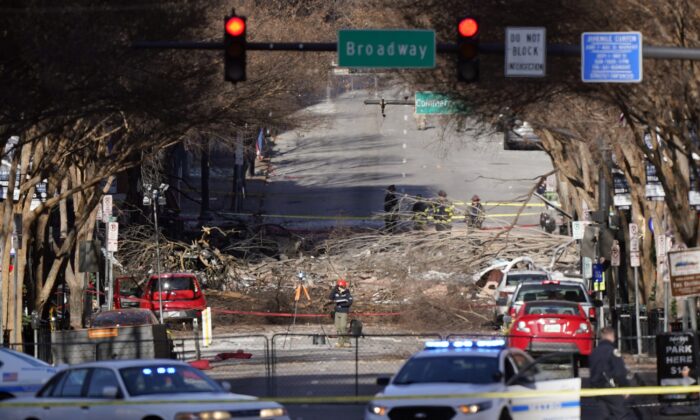 Investigators continue to examine the site of an explosion in Nashville, Tenn., on Dec. 27, 2020. (Mark Humphrey/AP Photo)
Crime and Incidents

“I think everybody, the U.S. Attorney, the FBI, has been very careful not to use the ‘T’-word here, because it’s not consistent with ‘T’-word actions,” he said in a CNN interview, adding that the reason why could be due to there being “no manifesto or political statement” written by the suspect.

The mayor, meanwhile, told the network that he is hoping that federal aid is provided after the explosion.

The FBI and other federal officials on Sunday evening identified the suspect as Anthony Quinn Warner, 63, of Antioch, Tennessee. They noted that DNA found at the blast site—located near an AT&T transmission facility—was tested and was revealed to have belonged to Warner.

U.S. Attorney for the Middle District of Tennessee Don Cochran said before the blast, Warner allegedly broadcast a warning. Warner “is the bomber,” and “he was present when the bomb went off,” adding that he “perished in the bombing,” Cochran added.

According to public records, Warner had lived at a home in Antioch, southeast of Nashville, that was searched on Saturday by FBI and U.S. Bureau of Alcohol, Tobacco, Firearms and Explosives officials following the huge Christmas Day blast. Those records showed that Warner also lived at the same house as his father, Charles Warner, until his father died in 2011. Charles Warner had worked for Bell South, a company later acquired by AT&T.

Cooper told CBS News on Sunday that officials believe there is some connection to the explosion and the AT&T building.

“It feels like there has to be some connection with the AT&T facility and the site of the bombing,” Cooper, a Democrat, said on Sunday.

David Rausch, the director of the Tennessee Bureau of Investigation, noted that Warner was not on law enforcement’s radar ahead of the explosion.

Officers who responded to the scene said that an RV was broadcasting a warning message prior to the explosion.

“It was like, ‘Hello. This is a warning. For your safety evacuate the area,’” James Wells, one of the officers, said in a news conference. Officers began telling people to evacuate the area, going door to door to warn residents.